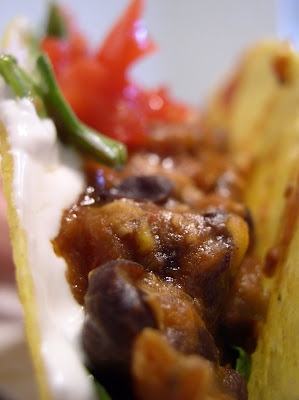 Yesterday I decided to break out the slow cooker that has been sitting, untouched, in my kitchen for the last year or so. I don't know why I had this weird aversion to using it for so long; I came up with all kinds of excuses not to use it. It was too bulky; I didn't have the time to cook something for 8 whole hours; and besides, it was "buried" in one of my cabinets and it would be too much work to get it out. (In reality, it took me less than 30 seconds to remove it from underneath the small, unobtrusive box of hot sauce that was sitting on top of it.) But then I realized...what was I thinking? It's such an amazing cooking set-up. You throw in all the ingredients and walk out the door, only to come back later to wafting aromas and a fully cooked meal. Did I seriously not use this the whole time because I thought it was too labor-intensive?? So I did a little poking around on the internet to try to find a recipe for chicken tacos for Lisa's farewell dinner (before she leaves for the Peace Corps on Saturday) at the apartment tonight, but I was unsatisfied with what I found. They all seemed way too simple - "Cook chicken pieces and plain salsa for 8 hours" - I don't know, I wanted a little more complexity of flavor than that. So I kind of winged this one and took elements of different recipes I found and then added my own twist as well. And I have to say, it turned out way better than most recipes I make up as I go along! It was thick and delicious with well-developed flavors, yet it wasn't overly spicy (you could fix that pretty easily, though, if you wanted to). I think this would also be amazing rolled up in gluten-free corn tortillas, or maybe over a bed of Spanish rice and having a taco salad kind of set-up. (Tacos are just hard for me to eat while containing the filling.) I hope you enjoy! 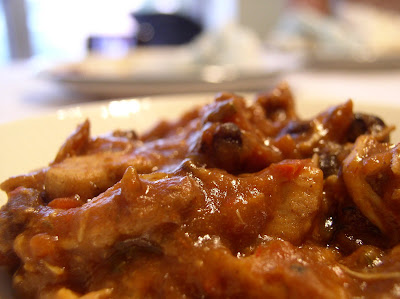 Slow Cooker Chicken Tacos 1 lb. chicken, cut into bite-sized slices/pieces 1/2 medium onion, chopped 2 - 3 tbsp. chopped fresh cilantro (optional) 1 - 2 tbsp. olive oil 2 heaping tsp. chili powder 1 tsp. garlic salt 1/2 tsp. cumin 1/4 tsp. pepper salt to taste 1 can gf tomato sauce 1 can gf diced tomatoes with green chilies 1 can black beans, drained 3 tbsp. cornstarch mixed with about 1/4 - 1/2 cup water (so it is thick but not too watery) Chopped spinach Tofutti "Better than Sour Cream" (or real sour cream if you can have it) gf salsa (I used Newman's Own) Chopped tomatoes Non-cheese (I used Vegan Slices) (or real cheese if you can have it) Gf corn taco shells (I used Old El Paso Super Stuffers) Heat the oil in a copperbottom pan and add the onions, chili powder, garlic powder, and cumin. Saute until the onions start to turn a little translucent, 3-5 min. Add the chopped chicken and cilantro, pepper, and salt and continue to cook on medium heat for 5-6 minutes, until the chicken is slightly browned (but it does not have to be all the way done). Meanwhile, in the slow cooker, pour the cans of tomato sauce, tomatoes, and black beans, and stir. When the chicken is browned, add it to the slow cooker and cover. Cook on low for 6-8 hours (adjust spices to your taste). I cooked mine for about 6 hours and the meat was very tender and falling apart, but I think it could easily have cooked for another 2 hours and been fine. Mix the 3 tbsp. cornstarch with 1/4 cup water, then add more if it is too thick. You want it to be thicker than milk and not too watery. Add the cornstarch mixture to the chicken and stir in completely. Allow to cook a bit longer while it thickens. Serve in tacos with spinach or lettuce, sour cream, cheese (if you can have it), tomatoes, salsa, and guacamole.
Posted by Claire Berman at 4:37 PM

카지노사이트 I think your site is very good.
My site shows Kpop’s music video.
If you have time, what do you think about visiting once?

카지노사이트 Does your site have a contact page? I'm having problems locating it but,
I'd like to shoot you an email. I've got some recommendations for your blog you might be interested in hearing.
Either way, great site and I look forward to seeing it develop over time.

that is the finish of this article. Here you will locate some web pages that we believe you’ll enjoy, just click the links ove 토토사이트

WOW, THIS IS A GREAT LIST OF BLOG COMMENTING SITES. I LIKED IT. THINKING OF DOING THE SAME FOR MY BUSINESS. THANKS. IT WILL HELP ME.
온라인섯다

I WAS CHECKING CONTINUOUSLY FOR THIS LIST OF BLOG COMMENTING AND I’M IMPRESSED! EXTREMELY USEFUL INFO SPECIALLY THE LAST PART I CARE FOR SUCH INFORMATION MUCH. I WAS SEEKING THIS CERTAIN INFORMATION FOR A VERY LONG TIME. THANK YOU AND BEST OF LUCK.
성인웹툰