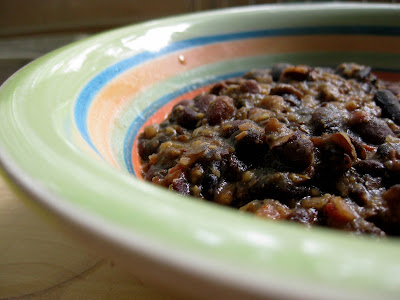 The supermarket here in Swaziland is one of those places where I never know which previously elusive ingredient will suddenly be staring me in the face when I walk in. Gluten-free pasta? Check. Dairy-free, gluten-free parmesan topping? Check. Soy milk? Check. Marshmallow fluff? (You know, the stuff you used to eat on peanut butter-fluff sandwiches?) Check. Taco seasoning and taco shells? Check. But despite the fact that I have access to such rarities as these, I have not seen black beans before here in Swaziland. Recently, thought, as I was passing by the dried bean and lentil shelf, I noticed a pile of small bags filled with them! This is the first recipe I’ve made with them so far, and I think it turned out pretty well. Mine ended up being fairly spicy, so be cautious with the number of chili peppers you add. I had jarred peppadews on hand and threw them in, but they are absolutely not necessary for this soup. If you don’t have peppers at all, you could just sprinkle in some cayenne pepper instead. The main flavor in this dish comes from the aromatic cumin, so if you’re going to be liberal with any ingredient, that’s the one.  Perfect to make a dreary, rainy, cold day better.
Spicy Black Bean Soup

Pre-soak the dried black beans for 12 hours with a ratio of one cup of beans to four cups of water. Rinse, place in pot and cover with 4 cups of water. Bring to a boil and cook for about an hour. Drain the beans and set aside. Or, if you are using canned beans, rinse them and set aside.

In a non-stick skillet, heat the oil. Cut the stems off of the chilies and pierce the peppers several times with a knife. Place them in the skillet and cook over medium heat for about 4 – 5 minutes. Add the garlic and continue to sauté for another 2 – 3 minutes.

Meanwhile, in a medium sized pot, fry the diced onion in a scant amount of oil. When the onion has become translucent, add the fried garlic and chilies to the pot. Next add the spices and stir well to mix.

Add the rinsed beans to the pot and stir into the spice mixture. Next, add the vegetable or chicken broth to cover the beans. Bring to a boil, then cover and simmer for at least one hour. The flavors will only intensify and develop more as you let it simmer, so the longer the better. I simmered mine for about 2 hours, adjusting the spices for my own taste. Towards the end of the cooking time, add salt and pepper to your own taste. Remove the chilies from the soup if desired, or leave them in for some extra heat.
Using a potato masher or an electric hand mixer, puree about half of the soup for a thicker consistency. Serve on its own or topped with freshly chopped tomatoes, chives, or Tofutti sour cream.

Alternatively, fry up some eggs and toast and top them with this soup!
Posted by Claire Berman at 3:26 AM No comments: Links to this post 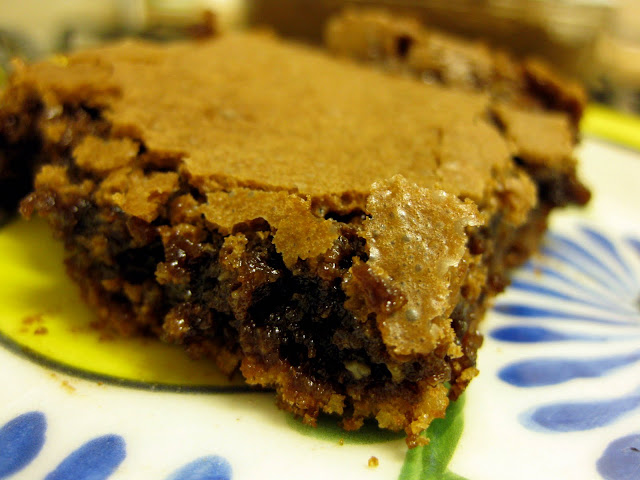 These are probably the best brownies I have ever had.  Ever.  They are moist, chewy, dense, and unapologetically chocolatey.  I got this recipe from Karina's blog as I was searching for something to fill the strong craving for chocolate I've been trying to fight with lately.  Fight over; point conceded.  Maybe several points conceded, considering how much of the batch I ended up eating.  These are a little like the flourless chocolate cakes I've made in the past, which use almond flour instead of regular flour, but these are unmistakably brownies in their taste and texture.
My mom recently sent me some peppermint extract as part of a lovely care package, and so I whipped up a peppermint icing to drizzle over some of the brownies, which was also wonderful and festive (despite the summer heat we're experiencing here in Swaziland).  The simple recipe for that is below.
These would also be wonderful with any of the following variations: 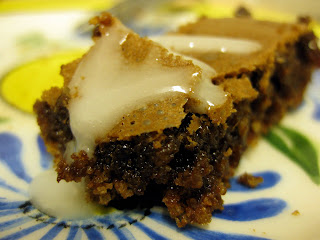 2 cups powdered sugar
1 - 2 tsp. peppermint extract (to your own taste)
2 - 5 tbsp. water, added to the consistency you prefer

Mix together and eliminate clumps from the icing.  Drizzle over the cooled brownies and serve!
Posted by Claire Berman at 9:24 AM No comments: Links to this post 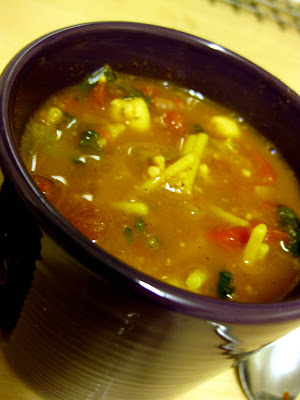 This is a beautifully satisfying soup that is rich in flavor and protein. With Moroccan-inspired flavors, it is easy to throw together and is a delicious way to enjoy those chickpeas you've had in your pantry forever but haven't used yet. Instead of thin egg-like noodles, I took some regular gluten-free spaghetti (mine was corn-based) and broke it into little pieces for this recipe. Let this simmer for about an hour and you will end up with a meal that is both tasty and healthy. 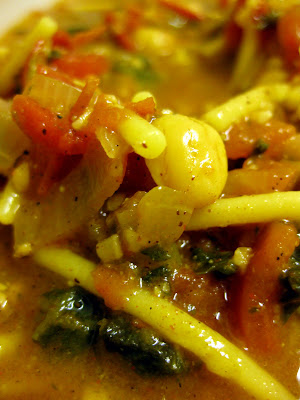 In a small bowl, mix the cinnamon, cumin, paprika, and cayenne pepper. Add it to the onion and garlic and stir to combine. Continue to cook for another 1 – 2 minutes to allow the flavor of the spices to come out.
Add the chickpeas and tomatoes to the mixture and stir to combine all of the ingredients well. Add enough water or stock (vegetable or chicken will work) to cover the chickpeas. Bring to a boil, then cover and reduce the heat. Simmer for about 35 – 40 minutes, adjusting spices as desired. You may have to add more water or vegetable stock if too much steams off.

When you are happy with the taste of the soup, add the frozen spinach and spaghetti noodles and cover again. Cook until the noodles are done and serve alone or with some gluten-free flatbread.

Posted by Claire Berman at 9:00 AM No comments: Links to this post