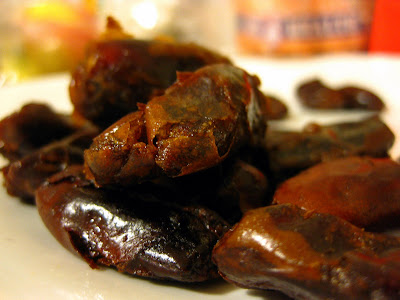 Yeah, I know this isn't really a recipe. Or, it's a recipe contained in the title itself. These aren't doctored in any way, or spiced, or anything like that. They are just an attempt at an imitation of a treat I found here at a health food store in Mbabane. The treats were called Jerusalem Toffees, and they were essentially just baked dates that were cut into thirds, and which are completely delicious and chewy, and not as sweet as the raw dried dates. I found them to be delightful and downed the bag within a few days. Unfortunately, I had bought the last bag they had in stock, so I decided to buy the regular dried dates from them and bake them myself. I lined them up in a little baking dish and stuck them in the oven at a low temperature (about 225 F) for about 45 minutes, but you can leave them in for as long as you want - mine turned out to be a little crispy when they cooled, which I like, but if you want yours softer, I'd take them out after 30 minutes or so. They smell heavenly while they are baking, and the people in the guest house actually thought I was baking a cake. These are a great snack to bring with you if you're on the go, but they would also be delicious if you ate them for dessert while they are still warm with some vanilla ice cream. So even though it's not a recipe, and more of an idea, I hope you'll try baking some of your own.

Preheat oven to 225F. Arrange dried whole dates in a baking dish and place in the oven for 30 - 45 minutes, or until the outside of the dates becomes slightly hard. If you'd like them to be a little chewier, increase the temperature to 275 F for the last 5 - 10 minutes.

Remove from oven and remove to a plate to cool. Eat warm from the oven or cool and store in an airtight container for a snack.
Posted by Claire Berman at 2:50 PM

Considering the massive availability of dates here this is a great "recipe" to try! Now we just need to chocolate coat them...

Awesome, this is exactly what I was looking for! I always am on the hunt for "recipes" for minimal ingredients and without any added sweeteners. Simple stuff like this is right up my alley.

Warning - I totally burnt a whole pack of dates using this recipe! The oven was too hot for too long! A friend made these at 200 degrees for ten minutes and they were perfect.

Its 225 Fahrenheit not Celsius