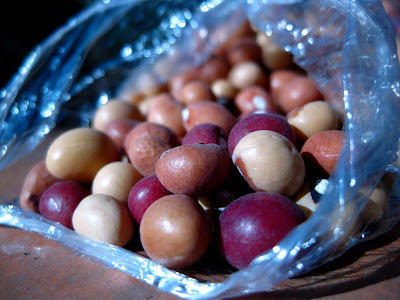 As I was walking down the street in Mbabane the other day, I passed a woman sitting by a huge bin of brown beady looking things. At first Ithought they might be roasted peanuts, but upon closer inspection, I saw that they were some sort of bean. I bought a bag and munched on them for the rest of the day, savoring their salty yet slightly sweet flavor. As I snacked on them, I held them up to my Swazi colleagues and asked what they were called. They looked amused that I was eating them and said, "Oh! It's tidlubu," but no one I asked could remember the English name for them. Finally Nokuthula remembered that they are called jugo beans English, which still didn't really help me much, as I had never heard of them before. They are also known as African groundnuts or bambara groundnuts. Either way, I was hooked, and the next time I was at the market, I found a bag of uncooked beans to try my own hand at it. They are so simple to make, yet they turn out to have such a powerful natural flavor that you don't need to add anything but salt, and that's even a matter of taste. They end up looking almost like candies when you turn them out on to the plate, sticking together like caramel would, but their flavor is a deep savory one that has just a hint of sweetness to it that is complemented perfectly by the tinge of salt. These are popular in many parts of Africa and are powerhouses of protein. I have never seen these in the U.S., but who knows? Maybe someone knows a place to find them. I just wanted to share with you all that if you have the chance to try them sometime, you should take it! 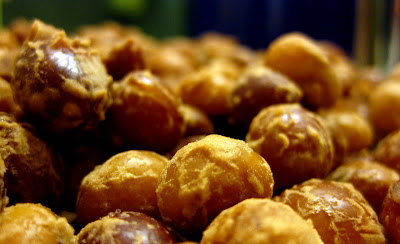 Wash the jugo beans and remove any defective ones. Place the beans in enough water to cover by several inches and bring to a boil. Continue to boil for 2 1/2 - 3 hours, adding water as necessary to cover. After about 2 hours have passed, and the water has turned to a soupy brown, add 1 tbsp. of salt and continue to boil until the water has almost entirely evaporated away. Drain excess water and place the jugo beans on a plate to cool. Add more salt as desired to your own taste. Eat plain as a snack, or add to rice for a pilaf, or roast in the oven, or add to your favorite tomato sauce for a delicious protein boost.
Posted by Claire Berman at 3:26 PM

you know, I am also looking for a place to buy uncooked ones here in the United states.
My parents are from Nigeria and they use to beans to make something called "Okpa".

Hm, I'm not sure you can get them here. Which part of the U.S. do you live in? I have a good friend from Kenya who also can't seem to find them here, and I brought him a whole bag when I got back from Swaziland. I wonder if you can order them online from somewhere??

How do you make "okpa"? Do you have a recipe for it? I'd love to try it. Thanks for your comment!!

Claire, you may decide to soak the tindlubu overnight in hot before cooking to cut the cooking time by less than half (green cooking?). Soak them in hot water if you will be cooking them within 8 hours or in cold water to be cooked within 24 hours (You just want them to be soft without turning sour). They cook well too, become much softer and fluffier, flatulence and constipation is reduced if you're prone to it...its just the way Swazis like it.

I live in South Africa - currently in KwaZuluNatal - but have found this be be known amongst the local inhabitants all along the East coast; that is Zululand, Swaziland, Eastern Transvaal Lowveld up to the Lipopo Province. We stayed close to Nelspruit for more than 20 years and we use to ask the locals to dig-up and supply our family with uncooked beans. Cooking in water (drained once or twice) with salt is the best way. Nowadays I find the dry Juno beans at grain merchants that normally would sell dry beans, lentils, peas, couscous and the likes. Good luck for finding it in the USA.

Normally, the jugo beans makes the perfect snack for.vegetarians and can be made as beans cakes also known as moin_moin or Koki which is also known.to.be.helpful to.diabetics.
check.out.more on www.nkono.co.uk

Hello Claire, one question I have is this... was the bag of bambara you bought in Mbabane crunchy or soft? In other words, were they dried roasted in the oven to become crunchy? I think I would like to try that. I sincerely hope you see my question. I have just bought a large bag that is locally grown, and I am thinking of making these as salty snacks that are healthy too. Thank you, Ronelle, South Africa.