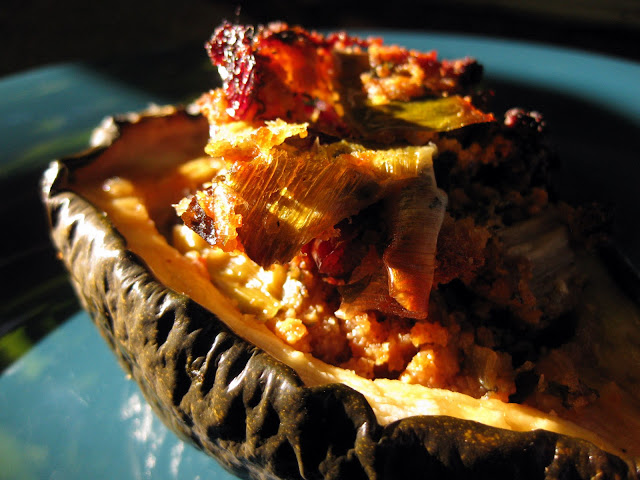 Don't let the length name of the recipe fool you.  This is actually pretty easy to make, as long as you have some time for the squash to roast.  And the end product?  It is so good.  So, so good.  I actually kept nipping away at the stuffing as it baked in the oven because it was so delicious, leaving me with a little less to actually stuff the acorn squash with.  So that's my warning to you, although I'm not saying don't eat along the way - I'm just saying, perhaps plan ahead and make a little extra stuffing specifically for the purpose of gnoshing.

I got the idea for this recipe on the Gluten-free Goddess's website, although my disclaimer is that I did not look at her recipe - only the picture - and went from there.  So I credit her for the idea for this fantastic bit of cooking - thanks, Karina! And since I still have quite a few of the Pumpkin Corn Muffins from last week in a freezer holding pattern, this was the perfect way to use some of them up.

The most contentious part of any Thanksgiving is arguably the stuffing.  Whose recipe is best?  I, of course, believe firmly that my mom's stuffing is the best in the world and would never consider another option for a moment.  So, I used my mom's stuffing recipe here - but if you feel the same way about your mom's recipe, go ahead and use it instead!  Just substitute the cornbread for the regular bread and you should be good to go.  This was a perfect pre-Thanksgiving dinner, full of harvest goodness and filling the house with familiar and comforting aromas. 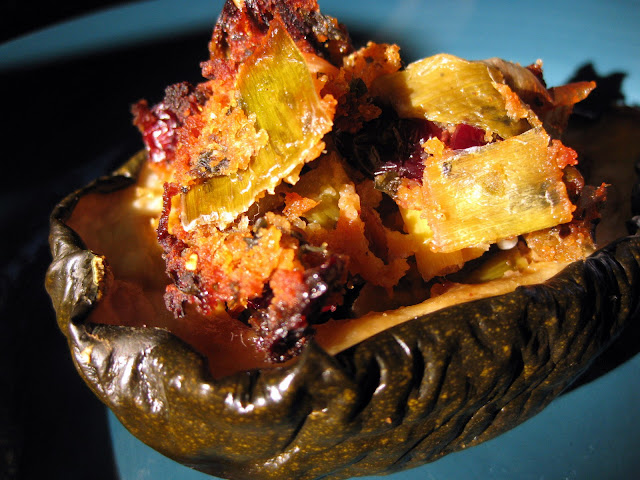 Preheat the oven to 350 F.  Slice the acorn squash in half, scoop out all of the seeds, and place in a baking dish.  Sprinkle with 1 tbsp. brown sugar and drizzle with maple syrup.  Place in the oven to bake.

In a saucepan, heat 1 tbsp. olive oil.  Add the leeks, celery, and diced apple and cook over medium heat for at least 5 - 7 minutes. Add the spices, cranberries, and broth and continue to cook until the leeks and celery are quite tender and the broth has reduced by about half (about 7- 9 more minutes).

On a cutting board, chop up the corn muffins into small pieces and place them in a large bowl.  Pour the leek mixture over the cornbread and mix well, coating all pieces of cornbread with the liquid.  Pour into two small mini-loaf baking dishes and place in the oven with the acorn squash to bake.

Bake the cornbread for about 20 - 30 minutes (depending on your oven temperature) or until the edges start looking crispy.  Remove from oven and set aside until the acorn squash has finished baking.  It's done when a fork goes in easily and the flesh of the squash pulls apart easily.  If desired, you can baste the squash in the maple syrup/agave nectar as it bakes.

When the squash is done (and times will vary based on your oven temperature and the size of the squash), remove from the oven and stuff with the cornbread stuffing.  Place back into the oven for 5 - 10 minutes, or long enough for the whole thing to heat through again.  Drizzle a little more maple syrup over the top, if desired.  When the cornbread starts getting crispy again, remove from the oven.

Serve on its own as a delicious, hearty vegan meal, or as a side dish to turkey.
Posted by Claire Berman at 8:47 AM