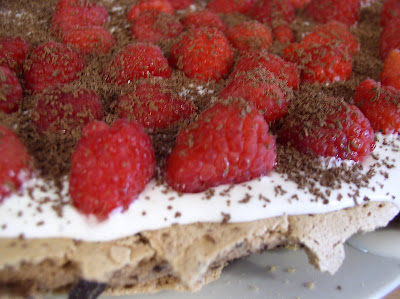 I stirred up some debate about the nature of a macaroon at my birthday party last weekend, and about what the name implies about the content of the dessert. I guess it has become so synonymous with coconut that any mention of macaroon now evinces an image of the deliciously chewy shredded coconut variety. It turns out I had some slightly disappointed family members on my hand who had pictured a coconut-filled dessert when I told them about the cake I was planning to make. But to me, a macaroon is a light dessert made from stiffly beaten egg whites that give it a fluffy, yet chewy consistency, usually with some additional flavoring. To this can be added any number of things: chocolate, coconut, nuts, etc. This recipe basically calls for a giant chocolate macaroon to be the base of a cake, which is then topped with silky vanilla cream, fresh raspberries, and shaved dark chocolate. Half of my family requested no raspberries on their cake (God only knows why someone would not want fresh raspberries on their pavlova!), and the two pictures that are up are from the two different halves of the cake.

I got this recipe from Nigella's website, and adapted it just slightly to make it dairy-free, since the cake itself is already naturally gluten-free. I wasn't sure how my family would like it, since they now trained to be innately suspicious about the taste of anything I can eat, since that means that is gluten-free, so I just didn't tell them how I made it until they had already raved about how amazing it was. This dessert was heavenly...and I don't use that word too often to describe food. The taste was intense, yet the texture was so light, that the combination was almost refreshing - and how often can you say that about a chocolate cake smothered in cream? 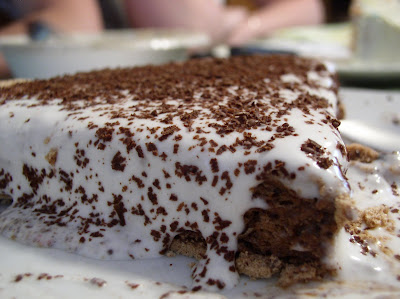 Preheat the oven to 350 and line a baking tray with baking paper.

Beat the egg whites until satiny peaks form, and then beat in the sugar a spoonful at a time until the meringue is stiff and shiny. Sprinkle over the cocoa and vinegar, and the chopped chocolate. Then gently fold everything until the cocoa is thoroughly mixed in. Mound on to a baking sheet in a fat circle approximately 9 inches in diameter, smoothing the sides and top. Place in the oven, then immediately turn the temperature down to 300 and cook for about one to one and a quarter hours. Be careful to make sure the temperature in your oven is accurate, since this can crumble easily if it cooks for too long. When it's ready it should look crisp around the edges and on the sides and be dry on top, but when you prod the center you should feel the promise of squishiness beneath your fingers. Turn off the oven and open the door slightly, and let the chocolate meringue disc cool completely.

For the vegan vanilla cream:

In a bowl, cream the Tofutti "Better than Cream Cheese" on low-medium speed, and add the 1/4 cup coconut milk. Add the powdered sugar as you continue to blend the mixture, then add the vanilla. Add the potato or corn starch and continue to beat with the mixer. Add the rice milk tablespoon by tablespoon to desired consistency, being careful not to make it too thin. Add a little more starch if you think it needs to be thicker. The cream that I ended up with was somewhat runny, so I froze it for about 2 hours until I was ready to serve it, at which point it had thickened considerably. Feel free to adjust all ingredients to your own taste as well.
**Note: I tried this again and left out the rice milk and ended up with a much better and thick consistency. If this is what you prefer, I would suggest using the second vanilla cream recipe listed.

When you are ready to serve, transfer the pavlova very gently to a large plate. Spread the frozen vanilla cream evenly across the top, then arrange the fresh raspberries over the cream. Sprinkle grated or shaved bittersweet/dark chocolate over the entire dessert and serve immediately.

Interesting -- I've always thought of what you're describing as a macaroon as a meringue. In any event, it sounds delicious. Also, I LOVE Nigella, too! Just discovered her Bites and Express books -- they's both so fun to read. Sometimes I feel like I have the vicarious experience of making (and eating) the food just from her descriptions.

Interesting! I guess I thought of a meringue as being something that was very stiff, whereas a macaroon is more soft and chewy. It's interesting to hear how everyone thinks of these things. I love Nigella, too, although I only know her from the website thus far! Thanks for your comment, Steph.