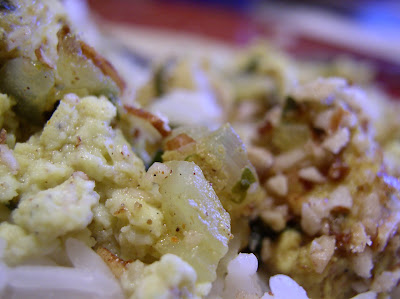 Lisa and I decided to have a Moroccan theme tonight for my "official" birthday dinner. I recreated and adapted a recipe for a Moroccan dish called "Bastila" that was served to me at a recent dinner party hosted by a previous Peace Corps volunteer in Morocco. She served there in the 1970s and you can tell that it is still such a big part of who she is. It was wonderful to hear stories about that time of her life, and about the food we were eating. Traditionally, Bastila is a pastry-type dish reserved for special occasions, in which spiced chicken, seasoned scrambled eggs, and toasted, crushed, and sugared almonds are all wrapped up in layers in phyllo dough, slathered in butter, fried on both sides, and then sprinkled with sugar and cinnamon. A true mingling of tastes in so many ways! The Bastilas at this dinner party were individually portioned, but apparently in Morocco, they can be enormous and sliced more like a pie would be. Since the phyllo dough is out for me, I decided instead to make the fillings and serve them on a bed of lightly spiced rice. Lisa brought a squash from her garden as well, which we decided to marinate and roast as a side dish. I think this dish would hold up well if one were to replace the chicken with tofu to make it vegetarian, and certainly a vegan could simply leave out the scrambled eggs in the tofu version. This dish is probably different depending on the region of Morocco it is served in, and though I have no idea which region this particular variety comes from, it is so nicely balanced in terms of spicy and mild, crunchy and soft, and sweet and savory, that I think anyone who appreciates a complexity of flavor in their meals would enjoy it. 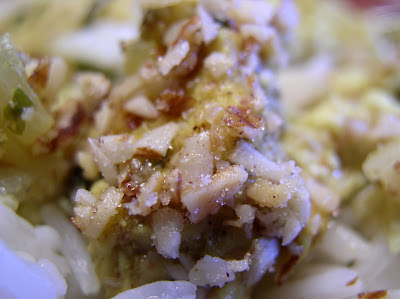 Bring 3 cups salted water to a boil. Add the 1 1/2 cups Jasmine rice, cardamom pods, and cinnamon stick. Return to a boil, then reduce heat to very low, cover, and steam for 15-20 minutes. Set aside.

Melt 2 tbsp. of Earth Balance "Buttery Spread" in a pan over medium heat. Add the slivered almonds and toast for 5-10 min., until they smell very pleasant, but be careful because these will burn easily. Remove from heat and let cool a bit, and then place into a food processor or chop by hand. Place in a bowl and add the sugar and cinnamon to your own taste. This is what mine looked like: 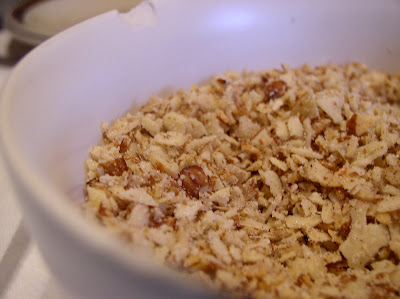 In a separate pan, melt the rest of the Earth Balance "Buttery Spread" with the olive oil, and sprinkle with salt and pepper. When it is melted, add the onion and cook over medium-high heat until the onions begin to turn translucent. At this time, add the chopped parsley and cilantro, cumin, turmeric, cayenne pepper, ginger, and cinnamon and cook for another 1-2 minutes, stirring. Add the chopped chicken and saute with the onions and spices until it is browned, about 6-9 minutes. Add 3/4 cup hot water to the chicken, bring to a boil, and reduce heat to medium and allow to simmer for at least 15-20 minutes, or for longer if you'd like the spices to mingle a little longer. Test and adjust spices to your own taste.
For the eggs:
Remove the chicken pieces and about half of the sauce to a serving bowl. Bring the rest of the sauce back to a boil, and then add the whisked eggs and, stirring constantly, scramble them in with the rest of the spiced sauce. Stirring constantly will ensure that the eggs are scrambled loosely and in fine pieces. Once the eggs are done, remove them to a separate serving bowl as well. 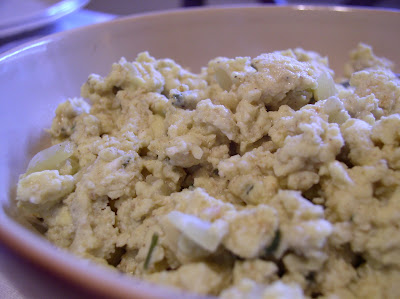 To assemble:
As mentioned, this is normally a filling that is wrapped up in layers of buttery phyllo dough, fried, and then sprinkled with powdered sugar and cinnamon. However, I decided that it would taste just as delicious and be a little better for the conscience to just stack it all up on a bed of spiced white rice. So to assemble mine, the rice went down first, followed by a layer of scrambled eggs, then the chicken with some extra sauce drizzled over it, and finally, the sprinkling of the toasted and sugared almonds.
And voila! Perhaps not as fancy as a pastry would be, but I promise you, you won't miss that part of it too much. 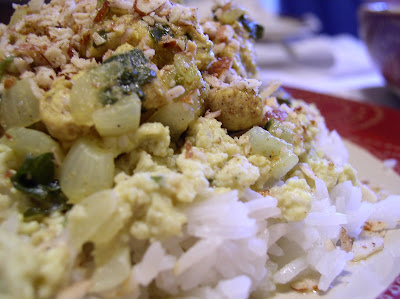 I was just looking over the blog and my mouth started watering again thinking of this meal. So tasty!

Oh, man, me too. Just think, you'll get to have the original soon!

I just want to say I’m all new to blogging and honestly loved your web blog. More than likely I’m want to bookmark your blog.

I’m impressed, I have to admit. Genuinely rarely must i encounter a weblog that’s both educative and entertaining, and without a doubt, you may have hit the nail about the head.

Good topic. I need to spend some time finding out much more or working out more. Thanks for fantastic information I was looking for this info for my mission.

I will recommend your website to everyone. You have a very good gloss. Write more high-quality articles. I support you.
토토

I would appreciate you that you pick up an important topic to write a thoroughly informative post on. I hope that you never stop and keep posting such valuable content 토토사이트

Thanks For Sharing Information, I really Like Your Blog. Its Really Helpful For me And Please Keep Posting.. 경마

Youre so right. Im there with you. Your weblog is definitely worth a read if anyone comes throughout it. Im lucky I did because now Ive received a whole new view of this. 먹튀검증사이트

Hello, i think that i saw you visited my site this i came to “return the favor”.I am trying to find things to enhance my web site! I suppose its ok to use a few of your ideas! 슬롯머신

I must thank you for the efforts you’ve put in writing this blog. I am hoping to view the same high-grade blog posts from you later on as well. 룰렛

Easily, the article is actually the best topic on this registry related issue. I fit in with your conclusions and will eagerly look forward to your next updates. 홀덤

I like the helpful info you provide in your articles. I’ll bookmark your blog and check again here frequently. I’m quite sure I’ll learn plenty of new stuff right here! Good luck for the next. 스포츠토토

I'm so happy to finally find a post with what I want. 안전놀이터순위 You have inspired me a lot. If you are satisfied, please visit my website and leave your feedback.

I'm very curious about how you write such a good article. Are you an expert on this subject? I think so. Thank you again for allowing me to read these posts, and have a nice day today. Thank you. 슬롯커뮤니티