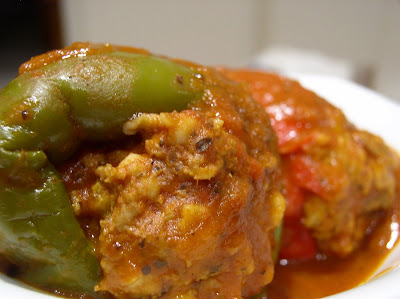 In the town where I spent most of middle school and all of high school, there is a huge Halloween parade on the 31st. Everyone goes. And no one is at home for trick-or-treaters. So at some point, the town came to an understanding that trick-or-treating would be expanded to the 30th and, for the few brave souls who wanted to try their luck with the mostly empty houses, the 31st as well. My younger sister's birthday is October 30th, and when we were still young enough to go trick-or-treating (and I'm not going to lie; that tradition lasted way beyond respectability with me and my cousin Erin, who were known to trick-or-treat at quite a ripe old age), my family would invite our cousins over every year on her birthday. We'd all have big steaming bowls of stuffed peppers with pumpernickel bread, and then we'd head out to collect our booty. We did this every year for as long as I can remember, to the point where this dish is synonymous with Halloween for me. Well, I got my annual hankering for stuffed peppers this week, and this weekend, Andrew and I made a huge pot of them. Being the good spice-fearing people that they are, my family would never add cayenne pepper to these, but I thought a dash would add a nice kick and round out the flavor a bit, which it did. Give these peppers an hour and a half to stew and you will not be disappointed with the rich flavor that develops! I brought some to share with some of the people I volunteer with, and they thought the sauce could be very versatile; some suggestions included to use it as a pasta sauce, over spaghetti squash, in a lasagna, over rice, or as a pizza sauce. It really is that good. But it's also perfectly delicious on its own. There is an excellent chance that you won't want to stop eating these and may in fact lick the plate shamelessly -- which is why I would suggest making a huge pot and living off of them for a week or so until you're peppered out. 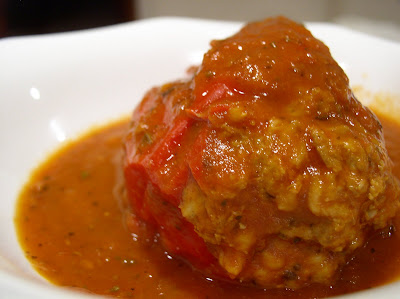 Mix roughly 2 tbsp. each of oregano, basil, and minced onion into the meat, and about 1 tsp. each of black pepper and onion salt (or to taste) into the ground turkey. Add the egg and oats and mix into the meat. Use your hands or a spoong to work it into the meat thoroughly.

Wash the bell peppers and remove the stems and all seeds and flaps of skin from each of them. Pack each pepper with meat and form the leftover meat mixture into large meatballs.

Place it all into a heavy bottomed pan with the peppers on the bottom. Pour the large can of tomato juice and the 4 cans of tomato sauce into a large bowl, and add the same spices that you added to the meat to the sauce to taste (I added about 1 1/2 tbsp. each of oregano, basil, minced onion, and onion salt, 1 tsp. black pepper and about 1/4 tsp. cayenne pepper). You can always adjust the seasoning to your taste after it has simmered for a while. Pour the spiced tomato sauce over the peppers and meatballs, and if the sauce does not yet cover all of them, add another can of tomato sauce.

Bring to a boil, then reduce heat to medium and simmer, covered, for about 1 ½ - 2 hours. This is a hearty meal on its own, so you don't have to serve it with anything else, but my family traditionally served it with pumpernickel bread (for the gluten eaters out there). Otherwise, I'd imagine that Beth's Yankee Cornbread Mix would go very nicely with this dish.

*If you want to use beef, lean hamburger meat cuts down on frothing that regular-fat beef can cause.
*If you want to make this vegetarian or vegan, rice can be used instead of meat altogether.
Posted by Claire Berman at 11:30 PM