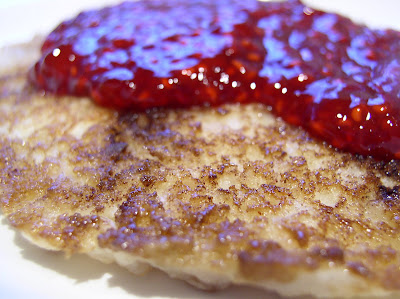 Oh, my goodness, these were good. Inspired by a recipe I found on one of my favorite sites, The Gluten Free Girl's blog, I set out to make these last night with a few tweaks, intrigued by how oatmeal-inspired pancakes could turn out. You see, oatmeal is another one of my favorite foods; I ate it for more than one meal a day sometimes in the days before my diagnosis because it was the only thing that would soothe my stomach. I have missed it dearly, and even though I have had a big bag of gluten-free oats sitting on my counter for months now, I only recently broke it open. I've heard that some people with gluten intolerance have bad reactions to oats if they try to eat them right away, so I wanted to give my body time to recover a bit before I started testing it with oats again. I wasn't overly impressed with the oats that I used when I had them as a bowl of oatmeal, but man, was I blown away by these pancakes. I like my oatmeal with cinnamon, brown sugar, and maple syrup (incredibly healthy, eh?), so I sprinkled some cinnamon and brown sugar onto the pan and poured the batter over it, which allowed it to crisp up into that delectable photo-worthy pancake you see above. I also tried one with peanut butter spread over it (it may be weird, but I love peanut butter on pancakes. Add it to my very extensive list of food quirks) and one with the raspberry compote that you see in the photo, but my personal favorite was the plain cinnamon-brown sugar combination because it really tasted like I was eating a steaming bowl of oatmeal. The raspberry compote was delicious, but I found that it drowned out that delicate flavor that I had been looking for when I made the pancakes. But by all means, use it if that's what your taste buds tell you! 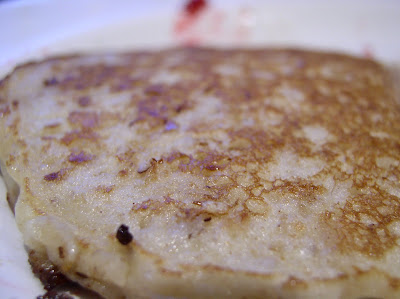 Oatmeal Pancakes (as seen on Gluten Free Girl's website, but with a few modifications)

Cook the oats as directed. Mix the dry ingredients in one bowl. Add the soy milk to the oatmeal and stir, allowing to cool for a few minutes. Mix the beaten eggs into the oatmeal and then add the flour mixture to it. Add the cooking spray or oil to the pan and sprinkle some cinnamon and brown sugar onto it, and then pour 1/4 cup pancake batter over it. Cook over medium heat until small air bubbles appear on the pancakes (don't touch them before then!) and then flip them over and cook for another 1 - 2 minutes. Remove from heat and serve immediately, topped with maple syrup, brown sugar and cinnamon, or the raspberry compote seen below. I made the entire batch of these, which made about 10 smaller pancakes, and I only ate 2 of them, so I froze them in baggies in pairs and plan to toast them when I'm ready to eat them. 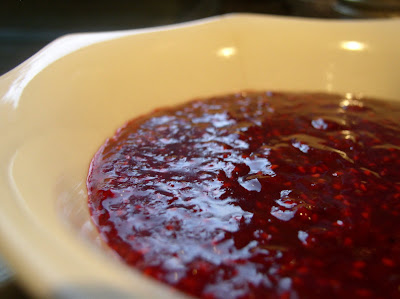 Combine the orange juice, sugar, and cinnamon stick in a small saucepan and bring to a boil, stirring. Add half the raspberries, reduce heat, and simmer until they have broken down and are falling apart. Add the rest of the raspberries and continue to heat for 1 - 2 minutes. Remove the cinnamon stick. Combine 1 - 2 tbsp. cornstarch with 1 - 2 tbsp. water and dribble it into the raspberry mixture a little at a time, stirring, until you have achieved the consistency you want. Once it has thickened to your liking, remove from heat and set aside until you are ready to use it.
Posted by Claire Berman at 8:59 AM

These pancakes are beautiful! I haven't tried oats yet, but I am getting increasingly tempted every time I see a post like this. Fantastic!

Sea - Thank you so much for the compliment! I understand the feeling - these would be a great first try at having oats, trust me :) I hope you enjoy them if you decide to make them!

Oh man, that compote sounds amazing. I wish I could be there for that!

Also- I like the new logo for your blog. Keep up the good work here, this is a nice claire-food oasis for me :)

Lisa - I wish you could have been here for that, too! You would definitely have loved it. But hey, if it makes you feel any better, I wish I were in Morocco eating sheep head. Yeah... :)

I'm glad you're still able to visit the blog even with the limited internet time there. I loved reading your comments on these posts!!

I discovered your blog site on google and check a couple of of your early posts. Continue to keep up the very good operate. I just additional up your RSS feed to my MSN Information Reader. In search of forward to reading extra from you afterward!? I’m usually to running a blog and i really respect your content. The article has really peaks my interest. I’m going to bookmark your site and maintain checking for brand spanking new information. https://royalcbd.com/product/cbd-oil-2500mg/