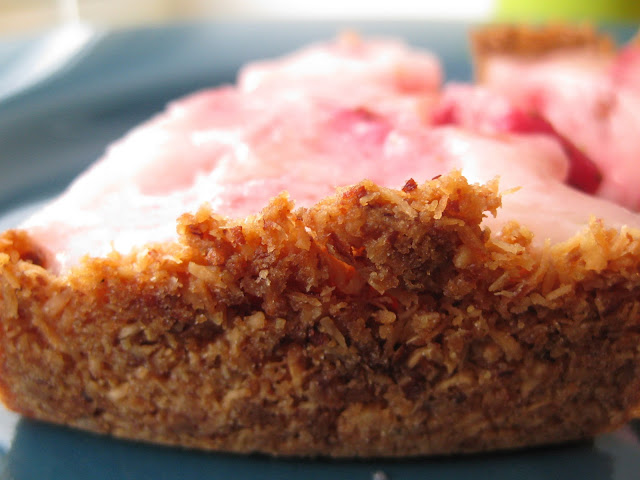 I've never really been much of a pie person in the past.  I'm not sure why.  Pie always seemed like so much work, and so messy.

But...that is one beautiful crust.  And it was so simple to make.  What on earth was keeping me from making pie all this time??

I used a strawberry custard filling in this for the first try, and it was delicious.  But I would imagine other successful flavor combinations oould include vanilla custard, chocolate pudding, key lime filling, non-baked cheesecake, or any dark berries - especially raspberries.

I taste-tested this with the kids I babysit, and while one of them hated it (because she hates coconut and almonds!), the other one couldn't get enough of it.  I eventually had to cut her off.  Her parents loved it, too.  They said the crust reminded them of Coconut Almond KIND bars.

This is probably the easiest pie crust you'll ever make - you don't even have to worry about peeling flour off of your rolling pin when it's done.  So, have at it.  As a former pie skeptic, I can tell you - it's worth it.

Here's what mine looked like just before going into the oven.  A springform pan would work best for this recipe, but if you don't have one (as I don't), a regular old 9-inch pan will work just fine, too. 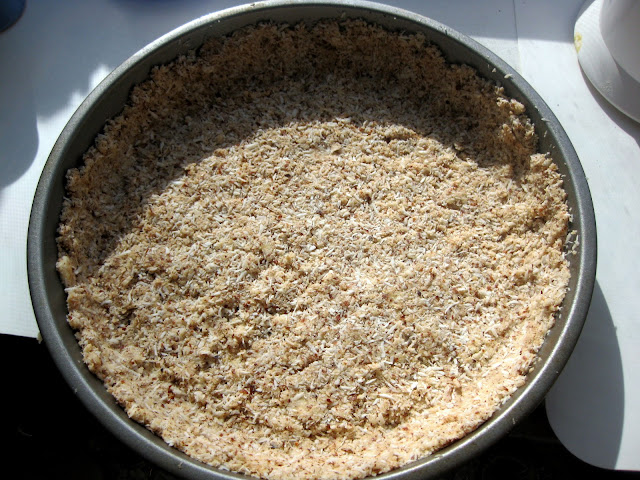 Preheat the oven to 300 F.  Spray a 9-inch nonstick pan (or a springform pan if you have one) with cooking spray.

Combine the coconut, almond flour, sweet rice flour, and salt in a bowl.  Add the Earth Balance Buttery Spread and vanilla extract and cut them into the dry ingredients until the mixture is crumbly and the butter is evenly distributed.  Press into the pan, pushing some of the dough up along the side of the pan.  Place in the oven for 20 - 25 minutes or until the coconut is lightly browned.  Watch it carefully so the coconut doesn't burn!  If it's browning too quickly, you can place a piece of foil loosely over the pan until it's done.

Remove from oven and cool before filling with cold filling.

**If you want to use this for a pie whose filling needs to be baked, I would place it in the oven for at least 10 minutes to firm up the crust before adding the filling.  I haven't tried this yet with a baked pie filling so I cannot guarantee that it won't burn being in the oven that long!
Posted by Claire Berman at 7:36 PM

it won't burn! i made a version of this for a tart and pre-cooked the crust for 15 minutes on 300, then cooked the tart for another 20 on 375 and it came out great.

1 tbsp of vanilla is way too much! it should probably be 1 tsp or even half a tsp.

Hi there, thanks for your comment! I used a tablespoon because I love vanilla, but certainly do whatever makes sense for your own taste. But it will turn out fine with the full tablespoon!