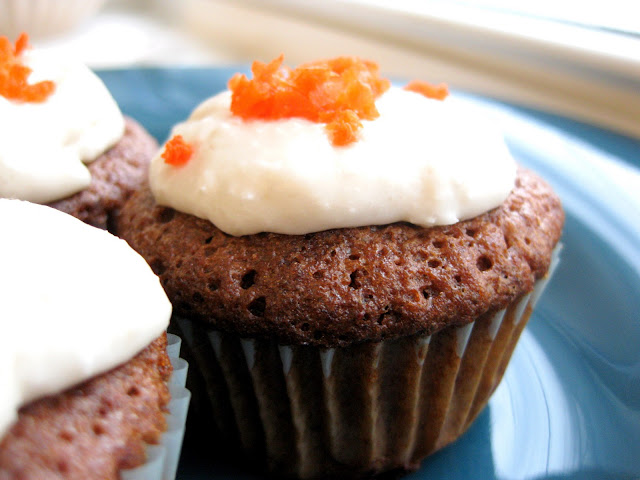 Carrot cake might be my favorite of all cakes.  It's subtly sweet, moist, with a hint of spice, and you can even trick yourself into thinking it's halfway good for you because it has a vegetable in it.  Carrots are good for you - they are high in vitamin A (off the charts, actually) and antioxidants.  And they promote good vision.  They're healthy; we should get them into our diets any way we can....right?  Right.

Everyone in Boston seems to have a copy of Flour these days, the new cookbook by pastry chef Joanne Chang, who owns several bakeries by the same name in Boston.  It's a gorgeous book, full of inviting recipes and pictures.  But the part that stood out to me the most was at the very beginning, when she writes about her path to becoming a pastry chef.  Secretly, I've always wanted to be a pastry chef and have spent more hours than I'd care to admit researching various culinary arts programs.  But I guess I've always thought of that as being unattainable because, who can afford that?

But that's what's so great about Joanne Chang's story.  She went to Harvard and got a degree in something extremely practical, worked for a few years in that field, and then - decided she'd rather bake.  She was able to find herself an apprenticeship of sorts in a bakery and worked her way up the ranks, learning from some of the best pastry chefs on the East coast.  And now - she has her own amazing bakery and her own amazing cookbook.

Maybe I need to start writing some letters....  But in the  meantime, here is my gluten-free adaptation of her fabulous recipe for carrot cake.  There was too much batter for only 12 cupcakes, so I used the leftover to make a huge pancake, which was almost tastier than the cupcakes themselves - almost.  These were received by a non-gluten-free test audience with exclamations ranging from "Dynamite" to "Num!" (that one was from the one year-old I babysit).  Suffice to say - these are incredibly delicious.  Make them. 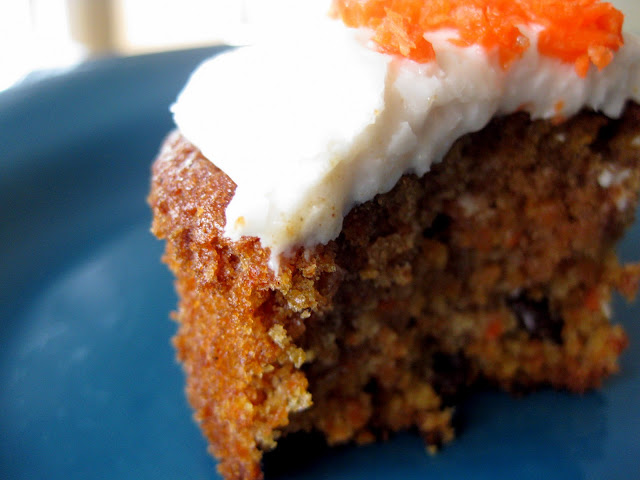 In a small bowl, combine the So Delicious Coconut Milk and lemon juice.  Let sit for at least 5 minutes.  Voila!  Dairy-free buttermilk. (Note: Don't worry if it gets kind of chunky; mine did too, and it was fine!)

Combine the eggs, granulated and brown sugar.  Beat with an electric hand mixer for about 8 minutes, or until the mixture has gotten thick and the color is light.  In a separate bowl, combine the oil, vanilla, and dairy-free buttermilk and whisk together.  Add slowly to the egg-sugar mixture and continue to beat until well-mixed.

In a separate bowl, whisk together the flour, baking soda, baking powder, salt, cinnamon, and pumpkin pie spice.  Beat into the wet ingredients little by little, mixing well.  When all of the flour is mixed in, add the shredded carrots and raisins and mix with a spoon or rubber spatula.  The batter will be pretty thin - thinner than other cake batter you have worked with.  Don't worry.

Pour/spoon batter into each cupcake liner, filling about 4/5ths way to the top.  Place in the oven and bake until a toothpick comes out clean, or until ever-so-slightly browned on top, or about 28 - 35 minutes depending on your oven.  Remove from oven and let sit in the muffin pan for 3 more minutes before removing to a wire rack to cool.  Cool completely, then ice with coconut cream frosting (see recipe below).  If desired, sprinkle with a few pieces of shredded carrot or shredded coconut for garnish.  Store in the fridge for up to 4 days or freeze and defrost as-needed.

**For carrot cake:  Prepare batter as described above, but pour into a bundt pan and bake for about an hour at 350 F or until a toothpick inserted comes out clean.  Use frosting recipe below.


Cream together the Tofutti, Earth Balance, and vanilla using an electric hand mixer.  Add the powdered sugar, a little at a time, until the icing is thick.  If you want the coconut to disappear a bit more into the icing, beat it in using the electric mixer.  If you'd like it to stay in bigger pieces, stir it in with a spoon.

Place in the fridge for at least 2 hours before using.
Posted by Claire Berman at 8:52 PM

Wow! Those look very cute SO delicious! I love carrot cake, and never would have thought of making carrot cake cupcakes! Thanks for the tip on making "buttermilk" with So Delicious coconut milk and lemon juice. I'm also going to try making these with Egg Replacer, instead of eggs. :)

Tanya, thank you for your comment - I'm glad these inspired you! I'd love to hear how they turn out using Egg Replacer. Good luck, and enjoy!

Have made this a few times. Everyone loves them! Raisins tend to sink so I add them just before popping them in the oven. Make my own coconut icing: 1/2 c coconut oil, 1 c powdered sugar, 1/3 t vanilla extract. Sooo good!

Hi there! I'm so glad these have turned out successfully for you. I love your suggestion for adding the raisins at the last minute, and I think I'll need to try your version of coconut icing next time I make these (which, um, may be soon) - it sounds delicious.

Thanks so much for your comment, and take care!
Claire