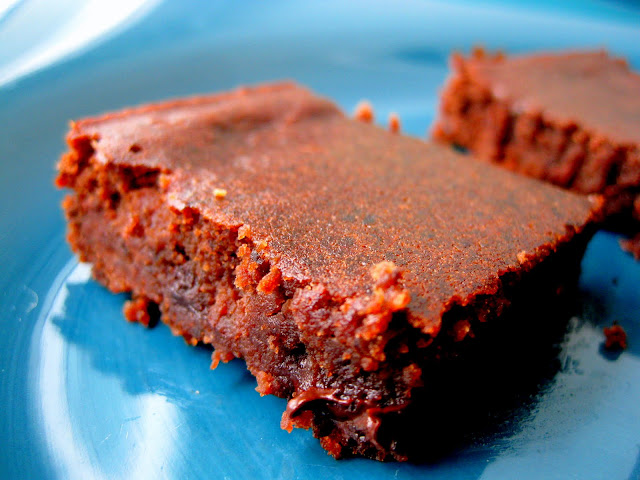 I don't know if you can call these healthy perse, but you can definitely call them healthier than regular brownies. They are incredibly moist, chocolatey, and full of amazing flavor with every bite.  They are probably the healthiest, most protein-filled brownies you'll ever eat.

And now I'll tell you the secret of why that is.  These are black bean brownies.  I know, I know.  Beans.  In brownies.  I had never tried black bean brownies before and can say that at best, I was skeptical.  There's a reason I had avoided making them.  I don't like the taste of bean flour in baked goods, and I could not fathom that a brownie with black beans as the backbone of the entire recipe would NOT taste beany.  But....they really don't taste beany!  I swear!

I had to resort to some trickery to find this out, though.  You tell someone that you're giving them a black bean brownie, they are going to imagine that they taste like black beans.  So....I just didn't tell anyone.  I'd recommend calling these simply "flourless brownies."  Your friends will probably think they are delicious, moist, and full of chocolate flavor.  They might wonder how you made them taste so good.  But they will definitely not guess that the answer is black beans.  I promise. 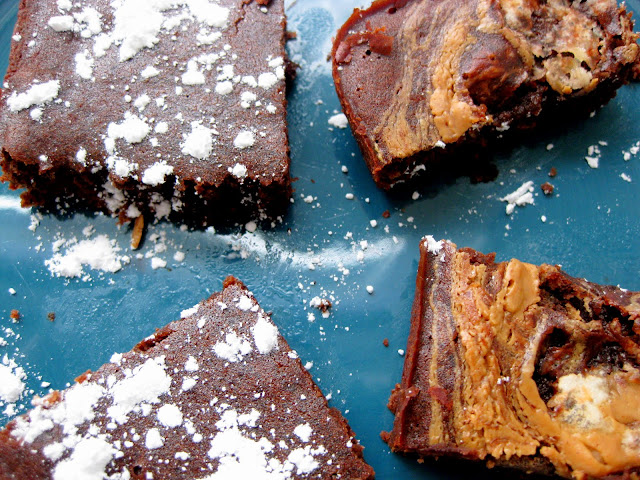 Right before putting these into the oven, I had one of my peanut butter-crazed moments, grabbed the jar off my shelf and drizzled it over half of the pan.  Then I added some of the homemade marshmallows I had left.  Swirled perfection. But they are fantastic plain as well, so feel free to leave the chocolate unmitigated.

Flourless Brownies (Adapted from this recipe)

Combine everything but the melted butter, chocolate chips, marshmallows, and peanut butter in a food processor and process until perfectly smooth, about 4 - 6 minutes.  As it is processing, add the melted butter a little at a time so the heat doesn't cook the eggs.  Once everything is combined, stop the processor and stir in the chocolate chips by hand.  Spread evenly into the pan and, if desired, swirl in peanut butter and marshmallows with a knife so that they are slightly mixed into the batter.  Bake for 25 - 30 minutes or until a knife comes out clean (I baked these for exactly 29 minutes and they were still fairly moist, but I like my brownies that way.)

*Note: the original recipe called for 3 eggs, but I used only 2 because I like my brownies to be denser and richer.  But if you like yours a bit cakier, go ahead and add all 3 in!

**These are best made the same day that you want to serve them.  After a day or more, they still taste great but start to look less pretty.  Keep them in the fridge for best results!
Posted by Claire Berman at 10:50 PM