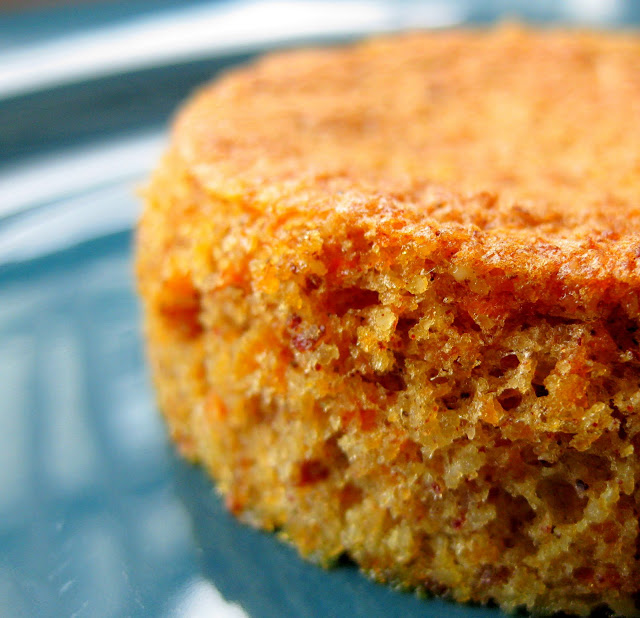 I am really on a roll with Passover food this year.  Usually I stick to a few favorites, but this year I've tried out several new recipes fit for the holiday, including this one and Flourless Orange Almond Cupcakes from last month.  The great thing about Passover food is that so much of it is naturally gluten-free.  It's kind of like our holiday, too.

I love carrot cake to begin with, and so when a friend of mine from school brought me a recipe for a flourless Passover version, snipped from the newspaper, I got really excited.  It only requires a few ingredients, and is sort of like a soft, lighter pudding version of the dense carrot cake I'm used to.  (Not that I'm disparaging the density of that cake.  I love that cake.)  This version, however, is seriously delicious ("a keeper," as one of my friends called it last night).

I halved the original recipe and made them into mini-cakes using my Fox English Muffin Rings.  This worked pretty well, although the batter is so runny that a little of it did escape from under the rings and onto the cookie sheet.  If you have any small custard dishes (about 4 inches in diameter), those would probably work better.  You could also use mini-loaf pans or a 9-inch round pan and just monitor it closely for doneness.  You could also make the original recipe by clicking here and making into a regular-sized cake as directed.  I added some pumpkin pie spice to mine and upped the cinnamon as well because I wanted it to taste like true carrot cake.  But that's really between you and your tastebuds.  I'll stay out of it.

If you like carrot cake, though, I hope you'll give this recipe a chance.  You won't be disappointed. 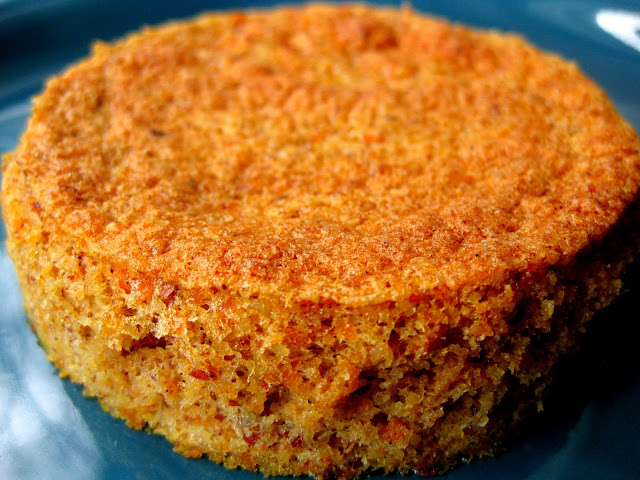 Preheat the oven to 350 F.  Line a cookie sheet with parchment paper, then arrange the 8 English Muffin rings on top and coat them all with cooking spray.  Or, prepare 4-inch custard dishes in the same way.

Separate 3 of the eggs, placing the egg whites and yolks in separate bowls.  Add the last (whole) egg to the egg yolks.  Using an electric mixer, beat them together.  Add the 1/2 cup sugar and continue beating.  Add the lemon juice and zest, cinnamon, pumpkin pie spice, salt, and vanilla.  Finally, beat in the almond flour and carrots.

Now rinse off your mixing paddles, and then beat the 3 egg whites and 1 tbsp. sugar together until stiff peaks form (about 2 - 4 minutes).  Gently fold the egg whites into the carrot-almond mixture.  Spoon equal amounts gently into each of the English Muffin Rings or custard dishes.

Bake at 350 F for about 30 minutes, or just until set.  The tops should be slightly browned and should spring back when you push on them lightly, and a toothpick inserted into the middle should come out clean.  Remove from oven and let sit on the cookie sheet for about 5 minutes, then slide the parchment paper off of the hot tray and onto the counter to cool the rest of the way.  Let cool for a full 45 minutes to an hour before serving.

Top with a light vanilla glaze or sprinkle with powdered sugar and cinnamon to serve.  (Check to make sure that the ingredients you use for that are kosher if you want it to be a Passover dessert, though!)  Keep these in the refrigerator until ready to serve.

Mix all ingredients together very well until there are no clumps.  Drizzle or spread over the mini-cakes in a thin layer. Sprinkle some cinnamon over the top for a nice visual.

Posted by Claire Berman at 8:46 AM

These look great although I am wracking my brain as to where I can find kosher for Passover pumpkin spice mix...Yum!

Or you could add 1/8th tsp. each of cinnamon, cloves, nutmeg, and ginger if you have those spices kosher for Passover.

Don't worry though, it will still be great even if you only add cinnamon :) Good luck!
Claire

Oops. Tofu comes from soy beans which, for many Ashkenazim, are not kosher for Passover.