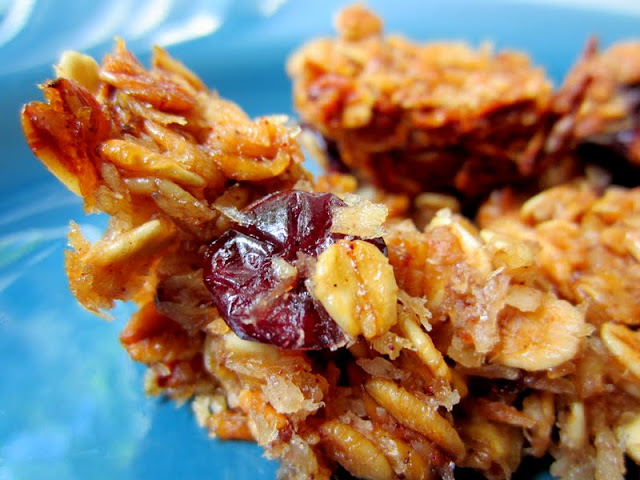 I'll confess that granola is not actually what I set out to make yesterday.  I was trying to make snack bars.  You know, the kind that, uh, don't fall apart when you try to eat them.  But this turned out to be an ambitious goal.  No matter how much honey I added, they stubbornly refused to stay together in bar form.

But that's ok.  I was putting too much pressure on them to be something they're not.  This was a granola recipe from the beginning.  I see that now.

And once I just let it be granola, it all fell into place. At first I was going to call this Blueberry Muffin Granola, but when I shared it with two of my friends, they immediately said it tasted more like cobbler.  Which makes sense, since it probably shares more ingredients with cobbler than muffins.  But, the point is really that it will taste like a delicious baked blueberry dessert of some kind, and you'll probably have a hard time not eating all of it from the pan.

I had originally added only 1/4 cup of honey, but after baking them for about 20 minutes, it was clear that the mixture was too dry to stay together in bar form.  So I added another 1/4 cup in the hopes that this would help - but it didn't.  And then I ended up with really sticky, soft granola.  Which, again, was delicious, but feel free to adjust the amount of honey according to your own tastes, since it's not going to stay together anyway.

I'm sure this would be wonderful with other add-ins - maybe some flax or chia seeds, or nuts, or a different combination of dried fruit.  Go crazy if you feel like it.  But if you're a blueberry fan, stick with what you know.  You won't be disappointed. 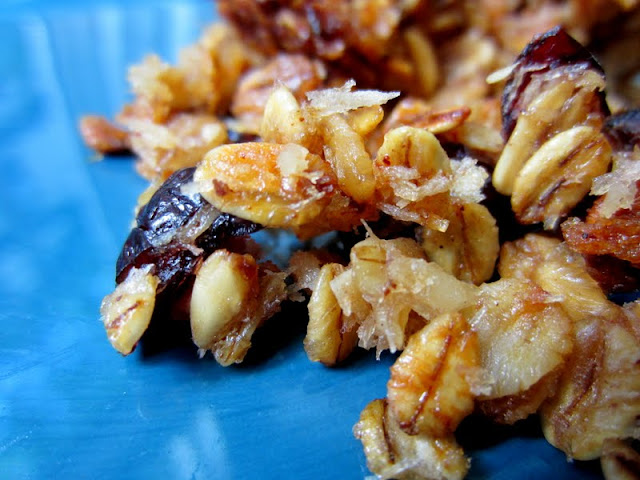 Preheat the oven to 350 F.  Line a 8 x 8 pan with foil and spray lightly with cooking spray.

In a large bowl, toss the oats, coconut, blueberries, salt, and cinnamon together.  Combine the wet ingredients in a separate bowl and mix together lightly, then toss with the oats.

Spread over the pan evenly and place in the oven for at least 30 minutes (for a softer granola) and for up to 50 minutes (for a crunchier granola).  Stir around every 10 minutes or so, and remove when you're happy with how browned it is.

Store in the refrigerator until ready to eat.  If there's any left.

Posted by Claire Berman at 9:13 AM