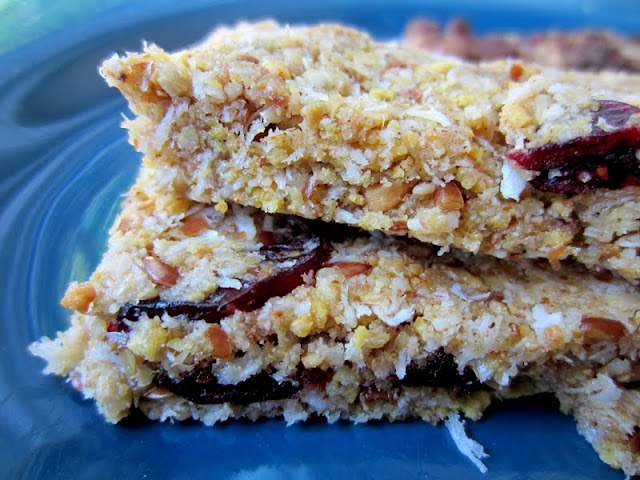 I've had a couple of attempts at granola bars recently, mainly because they can get so expensive to buy at the store.  So far, mine have mostly turned into granola because they just won't flippin' stay together long enough to be called bars.

I won't claim that these are the sturdiest of bars.  But as you can see, they stayed in the shape of bars long enough to be photographed.  So that's something.  They actually stayed bars all day, especially if they were in the fridge.  I don't think they'd necessarily survive a long hike in a backpack (at least, not without some serious tupperware protection), but they have definite potential for someone who is looking for bars for light use. I know I'll be making them again.

And they are really, really tasty.  A friend of mine had sent me a link for Grain-free Granola Bars, and I thought, why not?  It fits in with my general pursuit of bars at the moment.  But I'm not grain-free, nor did I want to rely solely on nuts for my bars.  So I adapted it and added some finely ground-up honey nut chex, and more honey than what was originally called for.  I also studded mine with some crushed chocolate chips because.....well, I don't have a reason, actually.  Because chocolate is never a bad thing to add.

If you want a stickier bar, feel free to add more honey, or maybe some agave nectar or maple syrup.  Experiment with your own favorite combination of nuts, seeds, and dried fruit.  Go with Cinnamon Chex instead of Honey Nut.  Make these your own! 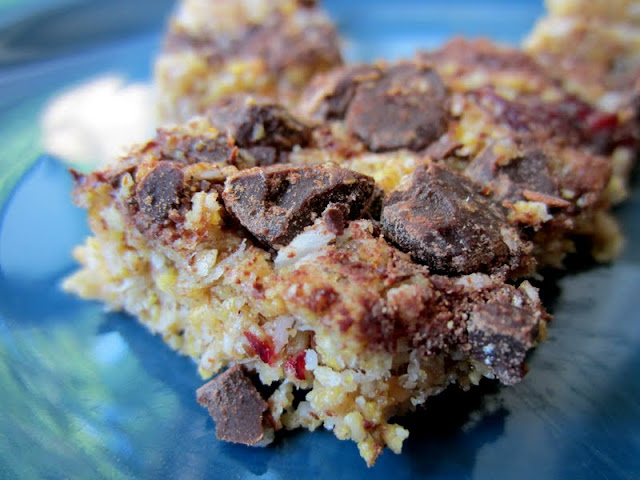 No Bake Chex Mix Granola Bars (Adapted from "Grain-free Granola Bars" on the Joyful Abode blog)
Makes one 8 x 8 pan of granola bars (about 15 small bars)
*You can double this recipe for thicker bars, or for a 9 x 13 pan.

Line an 8 x 8 pan with a sheet of wax paper (believe me, you'll want to have that paper there or you'll never get these out of the pan whole).

In a small saucepan, heat combine the honey, coconut oil, vanilla, and cinnamon.  Heat over low-medium heat until melted and it starts to bubble.  Pour over the dry mixture and stir well to coat.

Pour it into the pan and if desired, sprinkle the chocolate chips over the mixture (they might melt a little if it's still warm from the honey/coconut oil).  Using another piece of wax paper, press it really hard into the pan.  Like, really hard.  Remember, you want these to become bars!

Refrigerate for at least 4 hours or overnight.  When ready to eat, remove the wax paper from the pan and cut into bars.  Store in the fridge so they stay in bar form.
Posted by Claire Berman at 6:42 AM