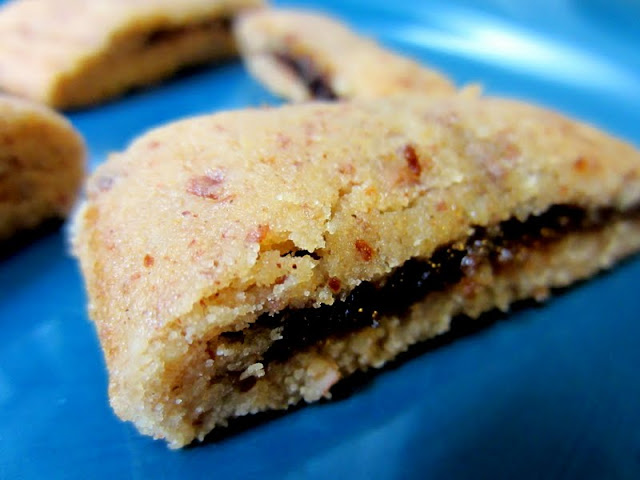 Who doesn't love fig newtons?  Seriously, if such people exist, I have not met them.

I don't know exactly what made me crave them last week.  It may have been because the last time I was at Trader Joe's, I came across a new product that made me want to jump in the aisle.  Fig butter!  And it was so cheap.  Needless to say, I stocked up, afraid that it would disappear quickly, like other favorite TJ's products that have vanished oh-so-suddenly from the shelf, leaving me standing forlorn in the aisle (cranberry chutney, I'm talking to you!).

These are super simple to make - I swear.  You mix the dough, spread it on parchment or wax paper, spread the fig butter over half of it, and then fold it over.  It's like a little fig burrito.  AND - they are gluten-free, dairy-free, and egg-free.  Seriously.

For my first attempt, I tried this recipe from Elana's Pantry just as she made it.  They were tasty, all right - but I didn't feel like they had the heavier texture of fig newtons that I was really looking for.

So I innovated a bit.  I tweaked the flours, adding some more whole grainy goodness to balance out the plain almond flour.  I made the dough a little drier, and substituted applesauce for some of the fat.  I baked them for slightly less time.

They came out so wonderfully, even I can't believe it.  I brought these into work with me, and my co-workers couldn't believe they were gluten-free.  One woman liked them so much that she kept checking in with me to see how many I had left, torn between taking one at the expense of someone else and just, you know, really wanting another fig newton.

But maybe you'll think of some other, new way to make these that will be even better.  If you do, please share your own tweaks with me.  Until you come up with your favorite version, though, these will definitely hit the spot for a fig newton craving. 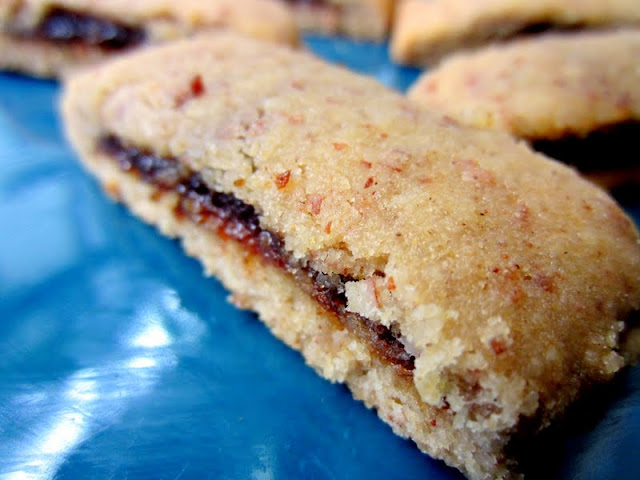 Remove the dough from the refrigerator.  Take about half of it and plop it onto one side of a large piece of wax paper.  Fold the wax paper over in half and use a rolling pin to make an even rectangle that is about 10 - 12 inches long and about 4 inches wide.  Peel back one half of the wax paper (so that the top of the dough is now exposed) and then transfer the whole thing to a piece of greased parchment paper for baking.  You can do this by greasing the parchment paper, then pressing it onto the top of the dough, then flipping the whole thing over and peeling back the rest of the wax paper (which will now be on top).

Place the parchment paper on a baking sheet and bake at 350 F for 10 - 13 minutes, or just until the dough is set and is ever-so-slightly browned.  It may not look totally done - that's ok.  Remove from the oven and let sit on the pan for about 3 - 5 minutes, then, using a sharp knife, cut into little fig newton squares and cool on a rack.

Repeat the process with the other half of the dough, or freeze it to use later.  Keep refrigerated, but leave out at room temperature or zap in the microwave briefly before serving for the best flavor.
Posted by Claire Berman at 2:14 PM

Thanks for posting, my mom can't eat gluten and loves fig newtons

What is figbutter? I may have to make my own, since there is no TJ in the area.