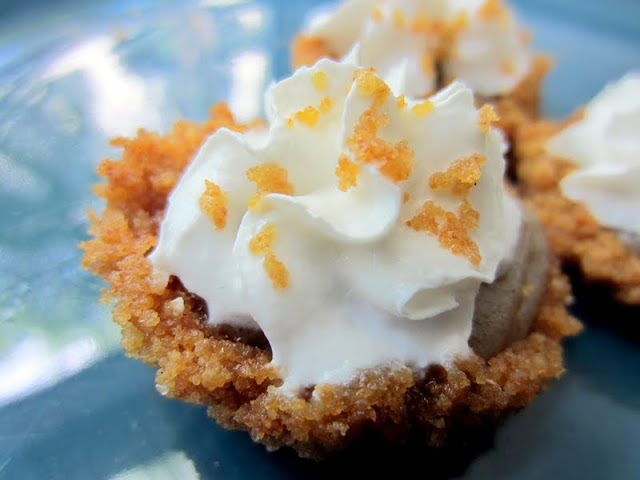 I DARE you to eat only one of these.  Triple dog dare you.

I developed this recipe for the Boston Pie Experiment this last weekend.  It was a pie contest really (or maybe pie bonanza is a better way to describe it, with just under 30 different kinds of pies to be sampled), but I didn't enter to compete.  I kind of just wanted an excuse to bake a ridiculous number of pies and create a new recipe.

This recipe underwent many iterations over the last few weeks.  I tried almond milk and coconut milk (both vanilla and regular flavors). With and without gelatin.  With less Earth Balance and with more Earth Balance. As a whole pie and as tiny pie bites.  They were all delicious, but I finally settled on this recipe as the one that held up best under adverse conditions (read: outside of refrigeration for any period of time).  My co-workers tried it, and I made one for my friends for my birthday a few weeks ago.  It got rave reviews.

My personal goal was not to win the pie contest.  It was simply to have people like my pie, even though it was the ONLY gluten- and dairy-free pie amid 30 regular old gluten pies.

And they did.  I tried not to stare at people as they ate it, but I surreptitiously stole glances at them as they tasted this, an expression of surprise coming over their face as the flavors washed over them (first the lovely banana flavor topped with whipped soy cream, followed by the slight kick of the gingersnap crust).  I read their mouths through the din in the room as they commented to their friends, "That is REALLY good!" A few people came back for a second sample.  And one of the guys running the event even high-fived me after tasting it.

It was a true test of taste to put a banana cream pie with a gluten-free crust and no cream (!) up against the buttery, flour-y, dairy-laden pies I was surrounded by.  But no one (that I saw) spit this out.  Most seemed to enjoy it, perhaps to their surprise.  And that's all the prize I wanted. 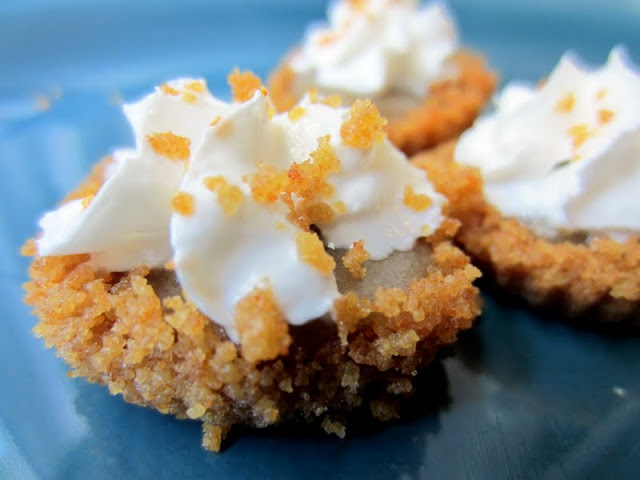 Put the whole bag of gingersnaps and the 2.5 tbsp. Earth Balance in a food processor and blend until very smooth and crumbly.  You want these to be very tiny crumbs that are well-incorporated into the butter.

If you're making a whole banana cream pie:  Pour the crumb mixture into a pie dish and pat it evenly around the sides and bottom of the pan.  Make sure you pat it down very firmly.

If you're making banana cream pie bites: Place a heaping teaspoon of the mixture into each mini-cupcake liner.  Using your thumb or the teaspoon, press it down firmly into the cupcake liner, creating a little well for the banana cream.

Separate your egg yolks and whisk them lightly in a medium-sized bowl.  Set aside.

Rinse the food processor out and blend the bananas and coconut milk together for about 3 - 4 minutes, or until very smooth.  In a large sauce pan, combine the brown rice flour, sweet rice flour, cornstarch, sugar, and salt and whisk together.  Add the banana and coconut milk mixture and whisk together.  Combine the Knox gelatin powder with 2 tbsp. of hot water, whisk together, and add immediately to the pot, stirring it in well (if you don't add it right away, it will become a block of gel).  Cook over medium heat, whisking constantly to avoid the flours settling, until it comes to a full boil.

When it comes to a boil, turn off the heat.  This is where it gets slightly tricky. You're going to add some of the hot mixture to the egg yolks, but just a tiny bit at a time, whisking each bit thoroughly into the eggs before adding more.  You're doing this to bring the temperature of the eggs up slowly so they don't cook or curdle on you.  Add about a tablespoon or less at a time until you've added about 1/3 of the banana cream mixture, and then return the egg mixture to the original pot and mix it in with the rest of the banana cream.  Return to medium heat and continue to whisk until it comes to a boil.  Boil for 2 more minutes (keep on whiskin'!) and then remove from heat.  Stir in the vanilla and Earth Balance Buttery Spread.

If you're making a whole banana cream pie: Pour the whole thing into the pie crust you prepared earlier.  Bake for 10 minutes at 350 F.  Remove from oven and let cool, then refrigerate for at least 4 hours to set.

If you're making banana cream pie bites:  Measure out a heaping teaspoon of banana cream for each pie bite. Bake for 6 - 8 minutes or until the edges of the crust are golden brown. If you're baking two trays at once, be sure to rotate them halfway through so they don't bake unevenly.  Let cool and then refrigerate for at least 4 hours to set.

No matter what kind of pie you're making: Top with Soyatoo Rice or Soy Whip and any leftover gingersnap crumbs before serving, if desired.  And try not to eat all of it yourself!

Posted by Claire Berman at 5:53 PM

Oh man, I love So Delicious coconut milk, and these look AMAZING!

Thanks, Robert! They are pretty fantastic - I hope you'll try them out for yourself :)

Claire - it was great to meet you at the pre-Pie Experiment cocktail hour, and to sample your pie bites at the event. What a lovely blog!