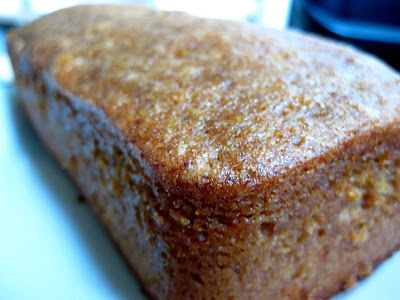 As I remain caught between seasons here, with my mind adjusting itself from what is normally autumn to what is now the rainy spring season in Swaziland, I am having trouble shifting my baking and cooking tendencies along with it. I have been thinking about pumpkin bread lately, and as my first care package from my family recently arrived, containing pumpkin pie spice, it was decided. The first challenge was the lack of canned pumpkin in the grocery stores here, but it turned out to be no problem at all, and way cheaper to make my own pumpkin puree anyway. The second challenge was to convert my family's classic pumpkin bread recipe to a gluten-free alternative. It turned out to be a success! While this is no healthier than a regular loaf of pumpkin bread, it's no worse either, and it tasted identical to me. It was just as soft and crumbly as my Aunt Rita's pumpkin bread always is, and it was like eating a slice of fall. The only thing about this bread is that, like other gluten-free treats, it won't last long before it starts to go bad, so you should plan to eat it right away or freeze it in slices before that happens. And while my aunt's recipe makes 2 loaves, I really didn't need the temptation of that much pumpkin bread sitting around my apartment, so I halved it to get this recipe (and as such, a few of the measurements are a little awkward). But otherwise, it's a delicious recipe that will bring Thanksgiving, warm houses filled with the smell of turkey and stuffing, crisp air and the Macy's parade to your mind. 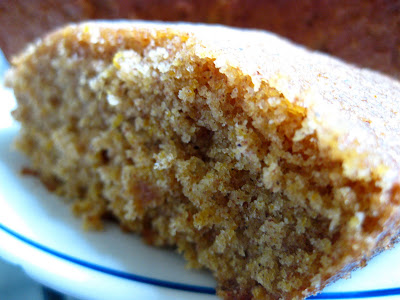 Combine the oil and sugar well, and then beat in the eggs. Add the pumpkin puree and mix well. Combine the flours, salt, baking powder, xanthan gum, and spices in a separate bowl and then add slowly to the wet mixture. Mix well and then pour into a greased or sprayed bread loaf pan and bake for 50 - 60 minutes, or until a toothpick inserted into the bread comes out clean. Let cool in the pan for at least 15 - 20 minutes, and then remove and continue to cool on a baking rack. Or, if you're like me and can't wait that long, serve warm from the pan with a nice, hot cup of coffee. **To make pumpkin puree, simply take large slices of fresh pumpkin and bake at 350 for 1 - 1 1/2 hours in the oven. When it is very, very soft, remove from oven, scoop out the pumpkin flesh, and remove to a large bowl. If it is soft enough, you don't need to puree it (I did not puree mine because I don't have any electric mixing devices), but if you do have a way to do it, it would be best to puree it to remove all chunks. Store in the refrigerator if you will use it that day, and otherwise, store in 1 cup portions in the freezer until you need to use them.
Posted by Claire Berman at 8:04 AM