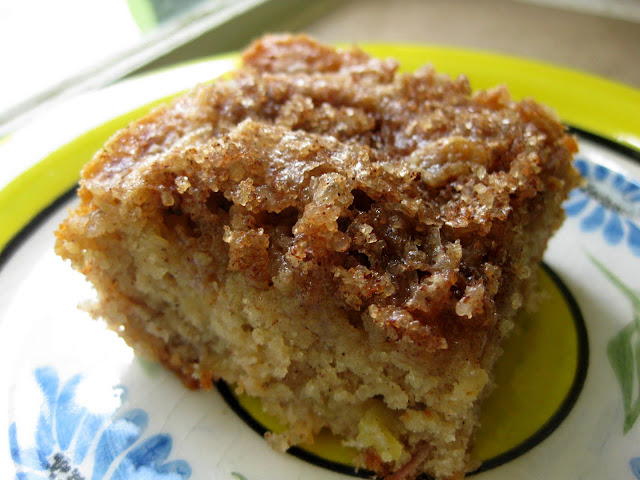 Struck by inspiration while wandering the supermarket here, I picked up a package of rhubarb last week without feeling very sure of how I'd use it.  My grandmother sometimes makes a delicious compote with rhubarb that is very simple to throw together, and that is what I thought of when I put it in my cart.  But as it sat in my kitchen over the next few days, the wheels continued to turn as I formulated a plan for it.  Thoughts of a rhubarb crisp passed through my mind, as did rhubarb jam and rhubarb pie.  In the end, though, the thought of a coffee cake was what grabbed me, so I threw this together, humming as I mixed flours, chopped rhubarb and apples, and stirred it all together, taking in the delicious scents of cinnamon and vanilla that wafted out of the mixing bowl.  I had a hard time waiting for this one to bake, and checked every few minutes in the hope that it would be done so I could try some.  When (what seemed like ages later) it was finally done, I ate a slice warm from the oven and nearly melted.  It held together beautifully, and the cinnamon streusel topping was the perfect complement to the tartness of the rhubarb, now softened into delicious sweetness with the chopped apple.  It's a cake I would not hesitate to serve to a non-celiac.  It tastes wonderful on its own, but for a bit of added flavor, serve with a dollop of Rhubarb Compote (see below), or with some of your favorite gluten-free, dairy-free ice cream (my favorite is So Creamy from Trader Joe's).

In a small bowl or cup, place one cup of soy or other non-dairy milk. Add 2 tsp. lemon juice and let sit for 5 – 10 minutes.

Cream the non-dairy buttery spread in a bowl and add the sugar, mixing very well until the mixture is crumbly. Add the egg and beat into the batter.

In a separate bowl, mix together the buckwheat flour, tapioca starch, brown rice flour, baking soda, baking powder, salt, and 1 tsp. cinnamon. Alternate between adding flour and buttermilk to the butter/sugar mixture, mixing well after each addition. Add the chopped rhubarb and chopped apple and mix evenly. Place into a deep 8” x 8” pan.

In another small bowl, combine the melted margarine (if you are using it), the brown sugar, and the cinnamon and mix into a crumbly mixture. Spread evenly over the top of the batter in the pan. Bake at 350 for 45 – 55 minutes or until the top is slightly browned and a toothpick inserted into the cake comes out clean.

Serve topped with rhubarb compote, if desired, or plain. 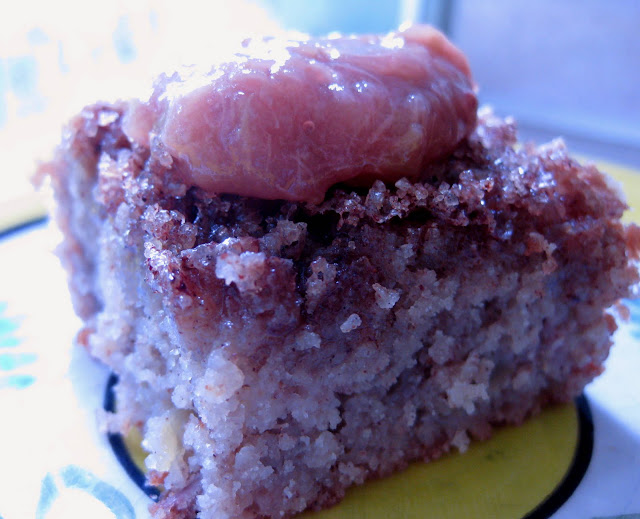 Place the chopped rhubarb and chopped apple into a small pan and add just enough water to cover them. Bring to a boil, then reduce to a simmer and allow the water to cook down until the rhubarb and apples have fallen apart and the mixture has become very thick. Add 3 -5 tbsp. brown sugar to your own taste.
Ways to use this compote:
-Eat it by itself

Posted by Claire Berman at 2:21 AM