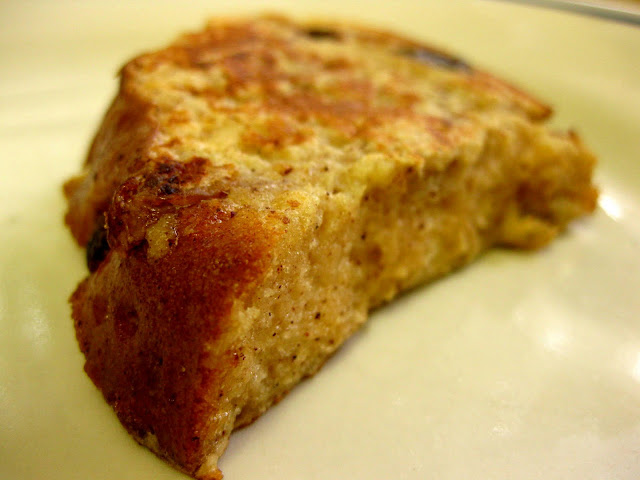 Mmmm, French toast.  It used to be my favorite thing to get at restaurants, and I have missed the delicious, crispy taste of it, served hot from the griddle.  Often, gluten-free bread is much too dry or crumbly to have a truly good piece of French toast, but while I was in Johannesburg a while ago, I found a little health food store that sold some yeasted cinnamon raisin bread.  Perfect!  I brought it home with me and stuck it in the freezer for later use, and the other day, I decided it was time to turn it into something I had been missing for a long time: my favorite breakfast at dinner.  My landlord smelled it wafting from my window and when I described for him what I was making, he said, "Oh, you're making Eggy Bread!"
Why don't we all call it that??  It makes so much sense.  In any case, no matter what you call it yourself, here is my recipe.

Delicious French Toast
Non-stick cooking spray or 1 tbsp. oil
6-8 pieces of gluten-free white or whole-grain bread (preferably a yeasty bread)
1 egg
1/4 cup soy milk (or other non-dairy milk)
1 tsp. vanilla
1/4 - 1/2 tsp. ground cinnamon
Powdered sugar, buttery spread, maple syrup, fruit, brown sugar and cinnamon, etc. for topping
Use non-stick cooking spray to coat a non-stick frying pan and heat over medium-high heat.
In a wide bowl, whisk the egg together with the soy milk, vanilla, and cinnamon and continue to mix until it is well-mixed and frothy.  Dip each piece of bread into the egg mixture on each side and place on the frying pan.  Reduce the heat to medium and let the pieces of bread cook on one side until they are crispy and brown.  Flip them over and cook for another 3 - 5 minutes until the others side is brown as well.  Remove from pan and serve immediately, topped with:
Powdered sugar, melted butter/margarine, and maple syrup
Cinnamon sugar
Fresh fruit and whipped cream
Dark berry jam, heated
Any other topping you enjoy! 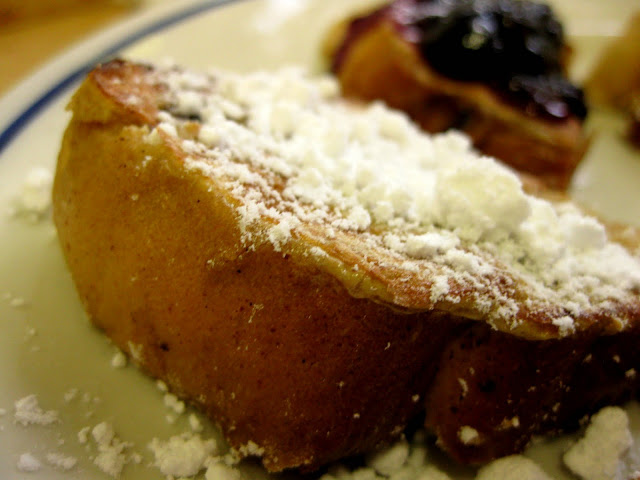 Posted by Claire Berman at 5:22 AM