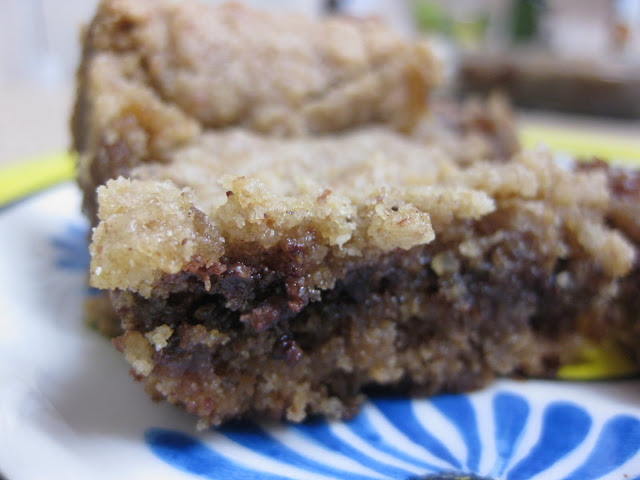 Perhaps I should just say first that these were gone immediately.  I just consider myself very lucky that I had two friends over to help me eat them or I might have consumed the entire pan, which would have been only fleeting joy, I'm sure.  So just consider yourself warned - if you keep reading, you will very likely end up with a highly tempting and addictive pan of cookie bars.
I adapted these from a recipe on Our Best Bites - the link to the original post, "Peanut Butter & Jam Bars," can be found here.
I know I have written of my undying love of all things involving peanut butter before.  I love it in all forms, and there are many variations that I enjoy.  Peanut butter with jam; peanut butter with honey; peanut butter with nutella; peanut butter with marshmallow fluff (yes, that's right); and perhaps my favorite of all, peanut butter with maple butter.
So I decided, why limit myself to only one of these variations simply because it's the one in the original title?  As I measured, spooned, sifted, and stirred, the delicious smell of peanut butter began to waft up at me, and I knew I couldn't.  I rummaged around in my cabinet and pulled out some nutella-like chocolate spread I found in the store here, as well as a jar of special Swazi-made creamed honey.  After spreading half the batter into the bottom of the pan, I spread nutella, honey, and strawberry jam on top, divided into three sections, and then covered it with the rest of the batter before sticking it in the oven.
Forty minutes later, it came out of the oven looking a bit like a piece of patchwork due to the different consistencies, but smelling mouth-watering.  We let it cool for as long as we could stand not to eat them, and then my friends and I each tried all three kinds.  Shari and I agreed that our favorite in terms of taste was by far the peanut butter and honey, although as it cooled, it took on a somewhat caramel-like texture that wasn't as easy to eat.  As for Joe, he liked the traditional PB&J variation (this is the same Joe of the recent Sweet Potato French Fries post).  The nutella one had its moments, but was not heavy enough on the nutella and thus suffered in the rankings.  With a little extra nutella though, the chocolate flavor would be more noticeable and I'm sure the taste would be more balanced.


What is comes down to is that all three varieties were delicious, fantastic, addictive, wonderful.  Need I go on?  Within 15 minutes, two-thirds of the pan had disappeared, and a mere 2 hours later (after a short gorging hiatus), there was nary a crumb to be found.  If you love peanut butter, this is the dessert you've been waiting for. 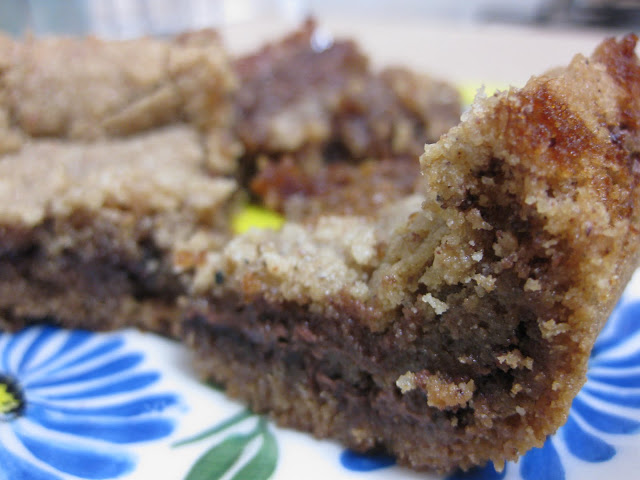 Preheat oven to 350 F or 180 C.  Spray a glass 8" x 8" baking dish with non-stick cooking spray.
In a bowl, cream the margarine and sugars together.  Add the peanut butter and mix well.  Add the egg and vanilla and continue to beat until smooth.
In a separate small bowl, combine the sorghum flour, brown rice flour, and potato starch with the xanthan gum, baking soda, baking powder, and dash of salt.  Add little by little to the wet mixture, stirring very well to combine.  Batter should be light and fluffy.
Place spoonfuls of the batter into the bottom of the baking dish, then using a spoon or spatula, spread them so they cover the entire pan.  Spread your toppings evenly onto the base in whatever proportions you prefer (if you use nutella, be sure to pile it on so the chocolate flavor will come out!), and then drop the remaining batter on top, once again in spoonfuls to ensure even coverage.  Use the spatula again to spread the batter evenly over the toppings.  Place in the oven and bake for 30 - 40 minutes, or until the dough is firmly set and slightly browned.  Be careful not to overcook!  The edges should be a lovely brown.  Remove from oven and let cool for as long as you can before devouring them.
Note:  The honey in mine boiled in the oven and created a sort of honey fountain over the dough, so be careful to keep an eye so that it doesn't spill over into your oven.  It also became a little harder as it cooled, so you might want to eat these while still warm.  These were my favorite of the three!
Note:  I made these in an 8x8 pan, which gives them some nice height; I'm not sure they would turn out as well spread any thinner than that, such as in a 9" x 13" pan.
Posted by Claire Berman at 6:05 AM