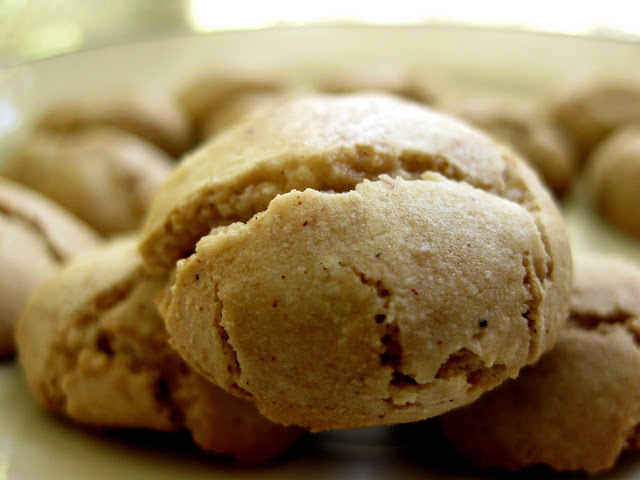 I've ended up having to give most of these cookies away by now out of fear that I would end up consuming them entirely on my own.  That is the occupational hazard of living alone and loving to cook and bake, I suppose.  You end up with lots of delicious food that you want to eat, but then comes the inevitable sense of guilt and gluttony as you lose count of the number of freshly baked, soft, and wonderful cookies you have eaten as you stand waiting for the rest of the cookies to bake.

These are delicious little gems, small and light enough that you can eat many without feeling too bad about it.  I tried making them with maple extract and vanilla extract, but you could also experiment with any other flavors/essences you might enjoy.  You could even try them with ground hazelnuts instead of almonds.  Try placing a few chocolate chips onto the cookies straight from the oven for another twist, even though they are just as good plain as they are with icing.  They are soft and chewy right from the oven, but they harden a bit when cooled (but remain pleasantly chewy).  I baked them for exactly 15 minutes, turning the tray in the oven halfway through, and removed them from the hot pan immediately to cool. 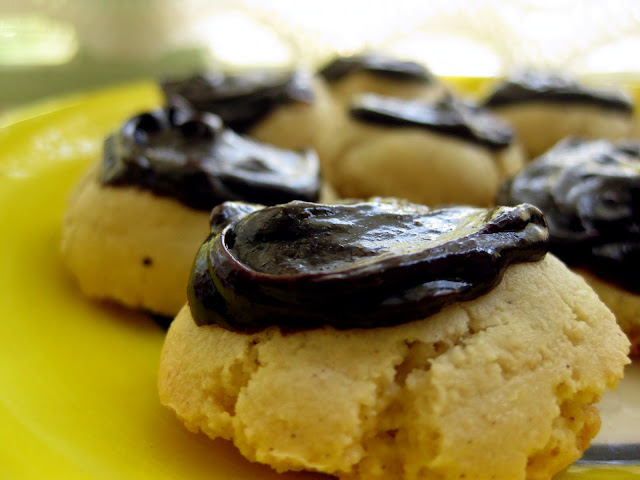 1 large egg
2 tsp vanilla essence OR 1 packet vanilla sugar
1 - 2 tsp. maple extract (if desired)
1/2 tsp ground cinnamon
1 cup icing sugar
1 - 2 tsp. pure lemon juice OR 5 ml finely grated lemon rind
2 cups ground almonds
For icing toppings: (optional)
10 – 15 ml icing sugar for decoration
50 g dark chocolate + 2 tbsp. soy milk
Beat egg, essence and cinnamon together.  Gradually add the icing sugar, still beating.  Beat the mixture until fluffy.  If you are making maple macaroons, add the 1 - 2 tsp. maple extract, depending on your own taste.  If you are making plain vanilla macaroons, omit the maple extract.
If you are using lemon juice instead of lemon rind, add it to the wet mixture now; otherwise, mix the lemon rind and almonds together.  Add to the egg mixture bit by bit, beating well after each adition.  The mixture will become crumbly.  Knead the crumbly mixture until pliable.  Cover and leave for 15 minutes.
Roll into walnut-sized balls.  Place on a greased and lined baking sheet.  Press the balls down slightly, allowing space for spreading.  If desired, sift a little icing sugar over macaroons.
Bake at 180 C/350 F for about 15 minutes, until crisp.  Allow to cool.
For chocolate topping:  In a small bowl, microwave the chocolate pieces with the few tablespoons of soy milk until completely melted.  Spread onto the cooled vanilla macaroons and allow to cool and harden completely.
For maple frosting:  In a small bowl, combine icing sugar, water, and maple extract until a thick paste forms.  Spread over the maple macaroons and allow to cool and harden completely.
Store in an airtight container.
Posted by Claire Berman at 4:47 AM