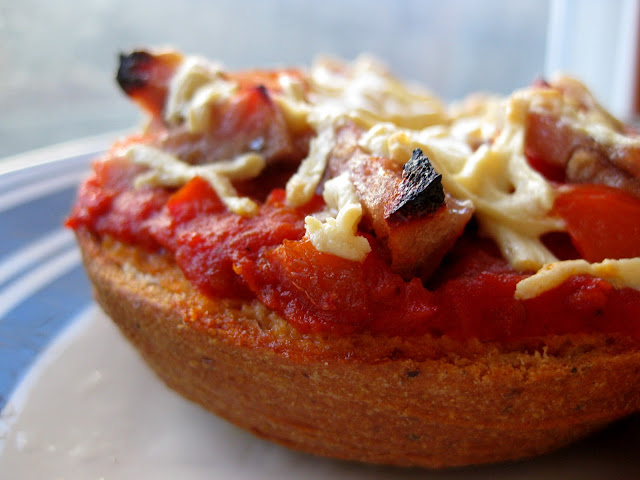 You can tell I just got done with finals by all the quick and minimal-effort food I've been eating.  Being gluten-free, it can sometimes feel hard to have a truly quick and easy meal.  This is pretty simple, though.  If you have the fifteen minutes it takes to bake it, you're golden after spending about 5 minutes assembling it.  Promise.

I recently attended a food and nutrition conference here in Boston, where I was given a bag of Udi's Multigrain Bagels to try (so, for full disclosure, I did receive these for free).  I think they are pretty fabulous; I've tried them with Tofutti Better than Cream Cheese, with peanut butter, and with a fried egg as a sandwich.  And now, with this, the final bagel, I decided to get a little more ambitious and see how they would hold up as a pizza base.

It turns out that they hold up really well, becoming deliciously crispy on the outside while staying nice and soft on the inside.  These little pizzas are very versatile, although the prime real estate space on the bagel is pretty limited, plus you have to work with the big hole in the middle, so you can't really pile on too many toppings.  Just take it easy and choose 2 or 3 to start with.  I had a Trader Joe's sausage in my fridge, along with a jar of roasted red peppers.  I went with that.  But next time - who knows?  It could turn into anything. 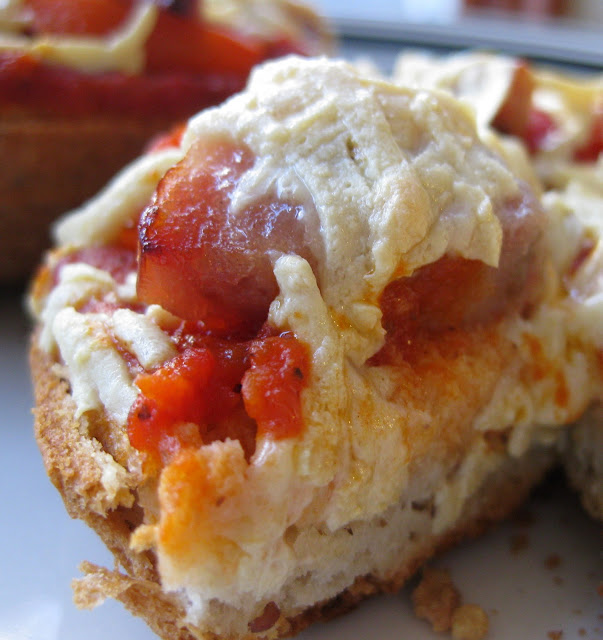 Preheat the oven to 400 F.  Line a cookie sheet with parchment paper so any cheese that falls off doesn't attach itself permanently to your pan.

Assemble the pizzas:  spread the pizza sauce over each bagel slice, then arrange the roasted red peppers and sausage slices, and then top with the Daiya Vegan Cheese and if desired, sprinkle with the spices.

Bake for about 12 - 15 minutes (but depending on your oven, it could take shorter or longer so I would start checking after about 10 minutes, just in case).  When the cheese is completely melted and the bagel slices are crispy, you can remove from the oven and serve immediately.
Posted by Claire Berman at 11:41 PM