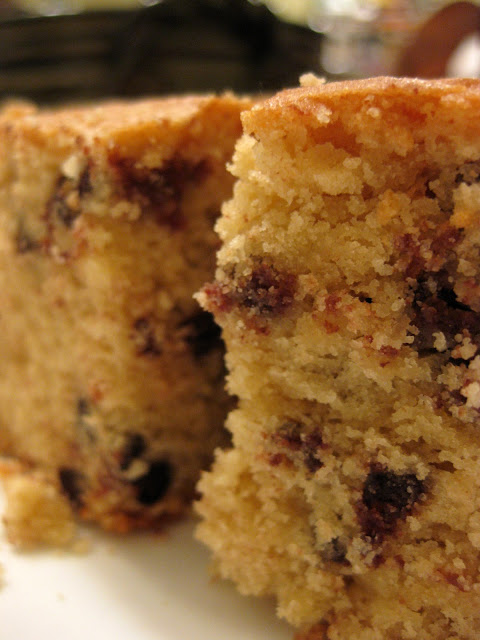 You're looking at round two of baking from my favorite new cookbook, The Allergen-Free Baker's Handbook: How to Bake Without Gluten, Wheat, Dairy, Eggs, Soy, Peanuts, Tree Nuts, and Sesame by Cybele Pascal.   (You can also check out her blog here.)  Unfortunately, the recipe for these blondies is not posted there, as far as I can see, but that is just more incentive to buy this fabulous cookbook for yourself. (Note: I did not receive a copy of this cookbook for free, nor am I in any way connected to Cybele Pascal, so this review is completely unsolicited and is based solely on my personal experience with her cookbook and blog.)

It's taken me a long time to build up my baking credibility with some members of my family since being diagnosed with celiac.  A long time.  For the first year, anything I brought to a family gathering was regarded with a great deal of suspicion.  Eyes would flicker warily to the plate I held in my hands, and looks were exchanged.  Sometimes it wasn't so subtle, and rumblings of "....gluten-free.....gross...." could be heard across the living room.  One time, I made a batch of gluten-free chocolate chip cookies and asked my cousin to walk in with them instead of me.  They were gobbled up and exclaimed over by all, but when I revealed that they were, in fact, gluten-free, one of my sisters actually grimaced and refused to touch them again for the rest of the night.

That's a powerful association to try to break.

As I've made and shared more and more desserts, a hesitant trust has formed.  People have started to realize that the lack of gluten and dairy does not break a dessert.  Things can be delicious even without those two seemingly core elements, they have realized.

I was flipping through Cybele Pascal's cookbook, and one of my sisters caught sight of a picture of the Chocolate Chunk Blondies and exclaimed over how delicious they looked.  That same sister happened to get engaged later that night - and so - clearly the only thing to do was to make a batch of Engagement Blondies!

I personally love baked goods warm out of the oven and thought these tasted heavenly while still hot, but others in my family insisted that the taste improved drastically once they had been chilled.  But go with your own gut.  I will say, though, that the sister who used to grimace at the mere mention of "gluten-free" finished half the pan.  By herself.

That, to me, says more than any blog entry can.
Posted by Claire Berman at 12:43 PM