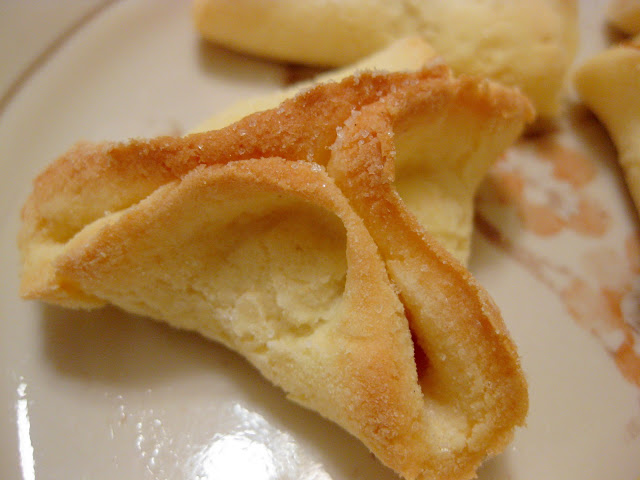 Ok, yes - it's too early for Purim.  Heck, to be honest, my family is not even one to celebrate that particular Jewish holiday.  Perhaps if I had known about the Hamantaschen, though, that would have been different...

These were my first Hamantaschen.  What is a Hamantaschen, you might wonder?  These cookies are little three-cornered wonders that puff up into bite-size pastries filled with any number of things, including jam, chocolate hazelnut spread, nuts, dates, and perhaps most commonly, poppy seed filling or prunes.  Their triangular shape is sometimes called evocative of the ears of the villain of the holiday of Purim - you guessed it - Haman, who is defeated in the story as told in the Book of Esther.

You'll probably forget all of that after your first bite.  The dough for this looks remarkably like regular old gluten dough, becoming elastic enough to survive a rolling pin and cut-outs, and pinching together like its gluteny counterpart. [We suspect that you could use this basic dough recipe as a pie crust as well, but that is yet to be tested.]  And after about 12 minutes in the oven, they turn into golden brown beauties, tiny crystals of sugar dotting their crispy tops even as the inside stays soft as a pillow and melts in your mouth.

These look a little different than the pictures of other Hamantaschen we saw, which seem to be more open in the middle and look vaguely like a mini danish.  But I rather like the way this shape distributes the filling, and so I would encourage you to try it out this way at least with some of them.  We filled ours with some of our homemade strawberry, peach, and blueberry jams, and also made a few with Solo Poppy Seed Filling (confirmed gluten-free here).  As my mom cut out the rounds and lined them up on the parchment paper, I filled each one with a teaspoon-sized dot of filling and pinched them together at the top.  A final dusting of sugar and then into the oven they went.

You would never in a million years know these were gluten-free.  With some gluten-free desserts, the flavor stays intact but the texture suffers, or vice versa; rarely do the stars align and create something that surpasses its glutenful counterpart in both taste and texture.  But both my father and brother actually requested that my mom make the gluten-free version of these because that is how good these are.  And how often does that happen?

All I can say is, there is a reason these are called "bakery style."  Seriously.  No one will regret your making these cookies - even if it's not Purim. 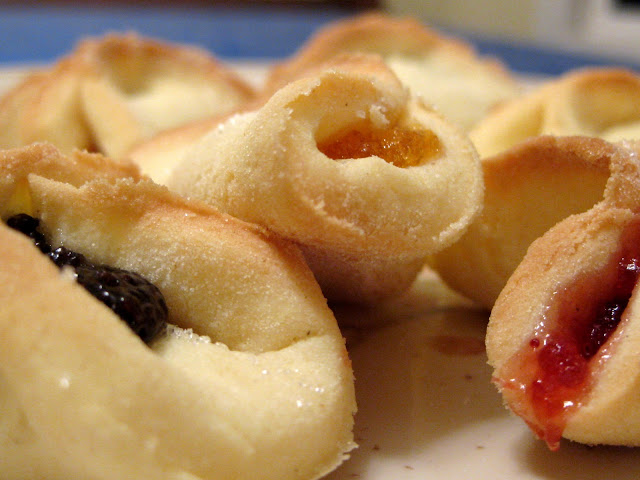 Combine the margarine/shortening and the sugar together.  Add the eggs and mix until smooth.  Stir in the orange juice and the vanilla.

In a separate bowl, fold together the white rice flour, tapioca starch, potato starch, salt, and baking powder. Fold the flour mixture into the wet mixture to form a firm but soft dough.  Transfer the dough to a lightly floured work surface and pat it down.  Cover and let it rest for about 10 minutes.  Alternatively, you can dust it with tapioca starch and wrap it in saran wrap and store in the refrigerator (up to 2 days) or freezer (up to 3 months) until needed.

Divide the dough into 2 or 3 flattened discs and work with one at a time.  Roll the dough out on a lightly floured board to a thickness of about 1/8 inch.  Depending on how sticky your dough is, you may need to use quite a bit more white rice flour to make it workable.  Don't fret, though - they'll still be delicious!  We used the top of a cup with a diameter of 2.5 inches to cut out rounds from the dough.  As you run out of space to cut dough from, rework and roll the dough out again, as many times as necessary until you run out of dough completely.

Line the rounds up on the lined baking sheet.  Fill each with a generous teaspoonful of the filling you've chosen and then draw each round of dough together by pulling three sides together and pinching them together in the middle.  You'll now have a pastry that looks like the top picture.  Once you've pulled all the rounds together in this way, sprinkle generously with the remaining sugar.

Bake for 12 - 15 minutes, or until the tops are nicely browned.  Remove from the oven and cool on a wire rack.  Or eat warm from the oven.  Store in an airtight container (if they last long enough to be stored).
Posted by Claire Berman at 11:25 PM

These look delicious! I may try them with butter instead of margarine. YUM!

Hi Carrie, I think butter would work perfectly in these - good luck and let me know how they turn out! Thanks for your comment,
Claire

Hi Claire,
I used this recipe and used butter and they worked out great! My study partner ate all the cookies I brought and she said that she couldn't tell they were gluten free! Delicious! Claire

Love your name! :) And I'm so glad these worked out with the butter instead of the margarine, and that you and your study partner enjoyed them so much. They're so addictive!

Comfortabl y, the post is really the freshest on this laudable topic. I suit in with your conclusions and can thirstily look forward to your next updates. Simply saying thanks can not simply be enough, for the fantasti c clarity in your writing. I definitely will correct away grab your rss feed to stay abreast of any kind of updates. Great work and also much success in your business dealings! https://royalcbd.com/product/cbd-oil-1000mg/