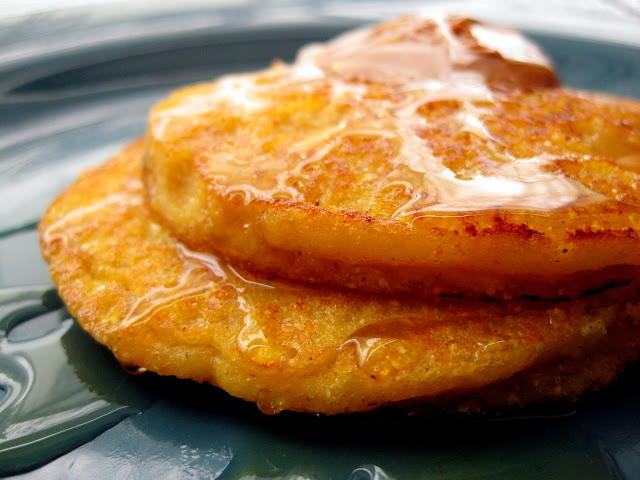 Intriguing, aren't they?  Pancakes...made of cornmeal.  Perhaps not the first whole grain you'd jump to if you were looking to change up your favorite breakfast food.

Mark Bittman of the New York Times wrote this week about pancakes.  About whole grain pancakes, specifically.  Have you ever thought about the intrinsic value of pancakes?  I mean, pancakes sans maple syrup, butter, powdered sugar, etc.  What are pancakes without all those frills?  Don't get me wrong - they are delicious frills, and personally, I am usually okay with the thought of a pancake serving a purely vehicular purpose.  As a simple means of transporting maple syrup from the plate to my mouth.

But I will admit, they are not the healthiest option, nor do the plainest ones taste like much if you take away the maple syrup.

So I decided to adapt this particular recipe from Mark Bittman's column, which was already inherently gluten-free, but which I predicted might lack the sweetness I'd want to have in my pancakes.  So I added a little sugar - not much, but enough to bring a tinge of sweetness - and a dash of cinnamon.

And they were actually good.  Golden crisp, they held their own in flavor and became even better when drizzled with agave nectar (you could also use honey or maple syrup).  I won't claim that these are necessarily healthier than regular pancakes (although being devoid of processed starches is at least one point in their favor).  But I think you'll enjoy the new flavor in this creative, whole grain departure from an old favorite. 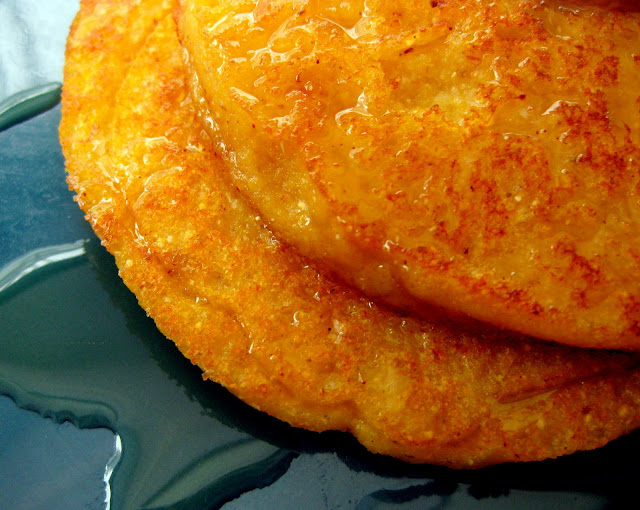 Combine the cornmeal and salt, and then add the boiling water.  Let it sit for about 8 minutes to soften the cornmeal.  Slowly add the hemp milk bit by bit, stirring to mix well.  Add the rest of the ingredients and stir well.

Spray a nonstick frying pan with cooking spray and heat over medium heat.  When it is fully preheated (when a drop of water sizzles on it), spoon about 1/6th - 1/4th cup of batter per pancake onto the griddle.  Cook for about 4 minutes (until small bubbles start to appear or the bottom becomes nicely browned) and flip, cooking for another 4 - 5 minutes, until they are done all the way through.

Serve with your favorite toppings (I had mine with a scoop of almond butter and a drizzle of agave nectar, but go crazy with your own favorites!).

Hint:  You could also make these savory by omitting the sugar and adding in your favorite herbs, such as basil, oregano, thyme, or rosemary, and serving as a side dish for dinner or lunch.
Posted by Claire Berman at 12:51 PM

These were the worst. They became a watery blob on the griddle. I am now having it plopped into a bowl. Hope it tastes better than it looks.
SORRY

Hello! I'm not sure why they would have turned out to be so watery...but I'm very sorry to hear they didn't work out for you :-/

I too am not sure why they didn't turn out for you, but they turned out great for me; super delicious, I'm making them again right now!

I'm so glad they turned out well for you - I might have to make them myself very soon :) Enjoy!!

We make this at least once a week! They are so good. Going Gluten Free has been so hard and expensive but this kind of recipes have been making my life easier. Thank you so much for the recipe!

You are welcome! I'm so glad you like these - I love them too, and they are so easy to throw together. :)

I think they are either not getting the water warm enough or letting it sit long enough. My first batch wasn't right, but, my second came out great.. I let mine cornmeal sit for about 15 minutes with the boiling water.

I found there was too much sugar so I only used less than a tablespoon and I used an egg because it fell apart without it. They tasted yummy!

Thank you so much for a very intelligent and refreshing article. Great job! https://royalcbd.com/product/cbd-gummies-25mg/