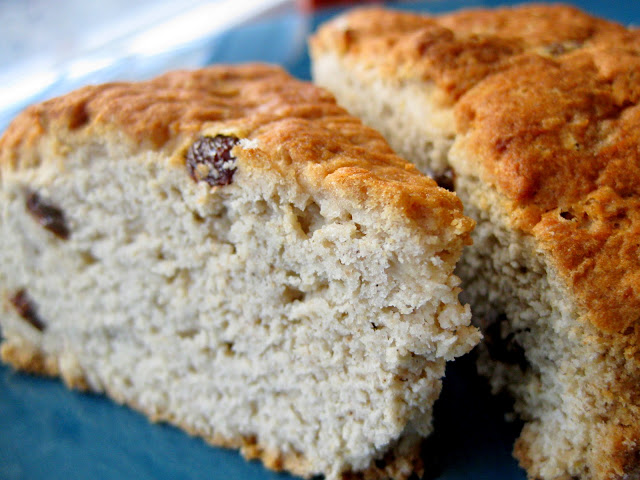 I'm a convert.  A soda bread convert, that is.

It's not like I used to hate soda bread or anything.  I don't even know that I ever even tried a regular piece before being diagnosed with celiac.  And maybe that's why I was never particularly compelled to make a gluten-free version of it.

If only I had known, I might have tried this recipe years ago.  It's a bread that sits on the fence, with a hint of sweetness on the one side and a slightly bitter aftertaste that gives you pause, and then makes you want to take another bite, and another, and another.  It doesn't taste quite like a regular loaf of bread, but also doesn't taste like a dessert bread.  It's fantastically in between the two, and to make it even better, it comes together very quickly since you don't need to proof any yeast.  The raisins add intermittent splashes of subtle sweetness (hint: try using the raisins that are specifically for baking so they don't dry out as much).  Absolutely perfect with a steaming cup of tea or coffee, this bread is pretty addictive.

Since I have learned not to trust my own taste buds as indicators of what others will find delicious, I tested it on several friends who can eat gluten;  one friend took one bite before proclaiming "Oh, it's delicious!", while another (who is a huge fan of regular soda bread) called it, in his own words, "DAMN good" (he really did put that emphasis on DAMN, I swear).

Having never made a regular loaf of Irish soda bread before, I was unsure about the texture.  I knew it was supposed to be a very sturdy bread, but even though it called for 30 minutes of baking, I got nervous after the top was dark brown after only 25 minutes and took it out of the oven then.  It was baked through, but ended up being rather soft when it cooled.  Unless you're really wanting that particularly hard texture, this isn't necessarily a bad thing, and besides, it firmed up quite nicely after 2 days in the fridge.  However, if you want to eat a firmer loaf, I'd suggest either baking it for longer at a lower temperature (perhaps 325 F instead of 375) or making it a day or two before you want to serve it.

You can find the recipe I followed from the Gluten-free Goddess here.  I used Sunmaid Baking Raisins, substituted a real egg for the egg replacer, and also brushed a thin layer of hemp milk over the top of the loaf before baking to give the crust more of a sheen and crunch.  Make this when you have someone to share it with - they'll appreciate it! 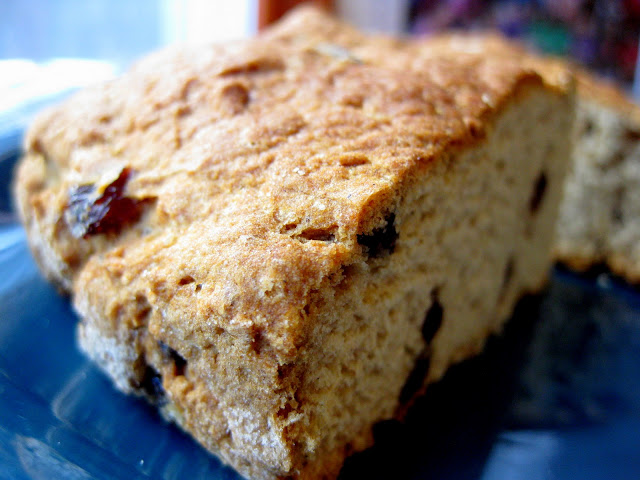 Posted by Claire Berman at 7:24 PM