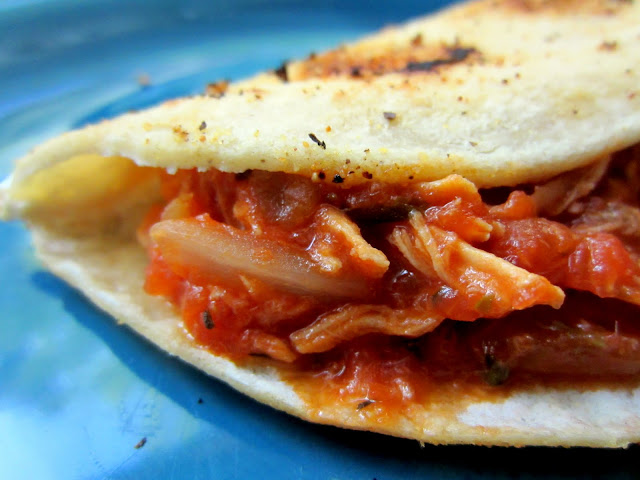 I say Mexican, you say....tacos?  Burritos?  Guacamole?  Salsa and chips?  While I love all of the above, there are times when I feel a pull towards a different kind of Mexican.  One that I don't taste very often, and which is full of simple -- but powerful -- flavors.  One that normally, I would have to go to a Mexican restaurant to find.  But that can be such a pain - finding a restaurant that can prepare something gluten-free, where there's no danger of cross-contamination?  I'm sure they're out there, but honestly, it's usually easier to make your own meal from scratch.

So that's what I did.  I recently became a fan of Pati's Mexican Table, a wonderful blog featuring recipes that will seriously make you drool as you click from page to page.  I started with her recipe for Chicken Tinga and modified it a bit, but I think what I ended up with is essentially what she did.  The sauce becomes smoky and flavorful with the chipotle peppers, and I let mine simmer for so long that the flavors had time to blend together in a truly fantastic way.  Pati suggests making it one layer in a stack of ingredients that make up tostados, but I ate it for at least five dinners in a row as you see it pictured here, in a crispy garlic pepper quesadilla with some melted Daiya cheese.  But it was also good over brown rice, with tortilla chips, or even on its own.  I can't imagine guacomole would be a bad idea.  I passed the recipe on to my cousin and got a text several days later telling me how fantastic it was.  I think you'll feel the same way. 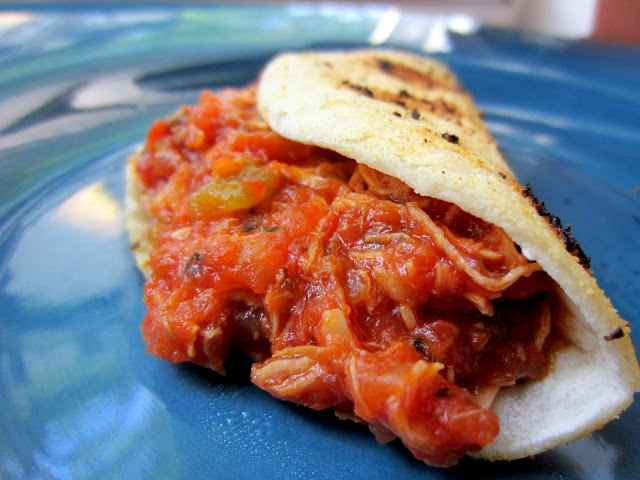 Boil the chicken in salted water and then pull apart to shred.  Set aside.

In a food processor, blend the tomatoes and tomatillos until very smooth.  Set aside.

In a large pan, heat the oil.  Add the onion and cook for 4 minutes, then add the garlic and continue to saute for another 3 - 4 minutes (but be careful not to burn the garlic!).  Pour the tomato mixture in and stir in the spices and chipotle peppers.  Bring to a low boil and then reduce to simmer, covered, for about 30 - 40 minutes, or until you are happy with the flavor.

Add the shredded chicken and continue to cook over medium-low heat until it is very thick (or at least, no longer liquidy).  Remove to serve.

Spray a nonstick skillet with cooking spray and sprinkle garlic powder and ground pepper across the bottom.  Place a corn tortilla on the skillet and press into the spices so they stick to it.  Sprinkle some Daiya cheese (or your favorite cheese alternative) over the tortilla and cook over medium-high heat until the tortilla is nice and crisp and the cheese is melted.  Spread 1/4 - 1/3 cup of the hot pulled chicken onto one half of the tortilla and fold over.  Serve immediately with guacamole, sour cream alternative, and/or salsa, if desired.  Also delicious on its own!

Posted by Claire Berman at 5:39 PM

I am very picky when it comes to Mexican food but this one is no doubt worth a try. It looks so yummy and nutritious. I think I'll head to the nearest Long Island gluten free stores and buy lots of ingredients to try this.