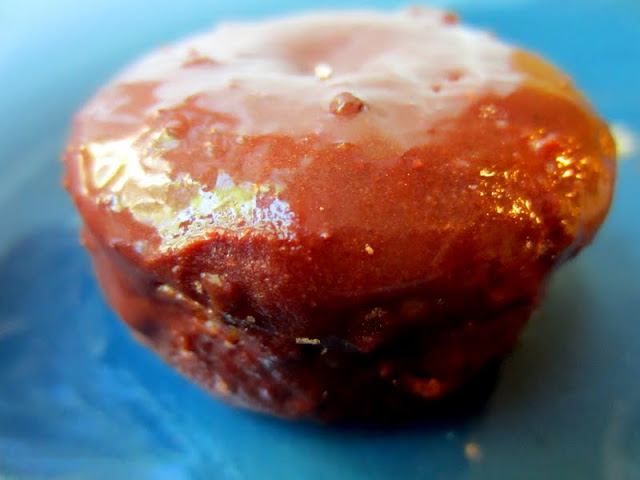 Mmmm, donuts.  How long has it been since you've had a donut?  I had to really think about that question.  Before this summer, it had been at least as long as I've known I have celiac (roughly 3.5 years), if not longer.

But now, armed with my Norpro donut pans (a birthday gift from my sister!), donuts are back in my life.  We've had a happy reunion.  Which is part of why I was so excited about this month's Gluten-free Ratio Rally assignment: donuts and fritters. 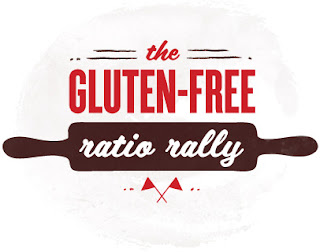 Now, I know that everyone loves a good, traditional, fried donut.  Who couldn't love them?  I thought about going that route.  But I wanted to take this opportunity to make some awesome, slightly healthier baked donuts.  The ratio I came up with for cake donuts was 2 parts flour: 1 part liquid: 1 egg.  The amount of fat used was so negligible that it doesn't even warrant a place in the ratio - it was 2 teaspoons for the entire batch!  Instead of non-dairy milk, I used cranberry juice as the liquid base in these.  For me, this ratio created a donut that held together and didn't crumble in my hands, and had a slightly dry crumb that was perfect for absorbing the glaze I slathered all over it. 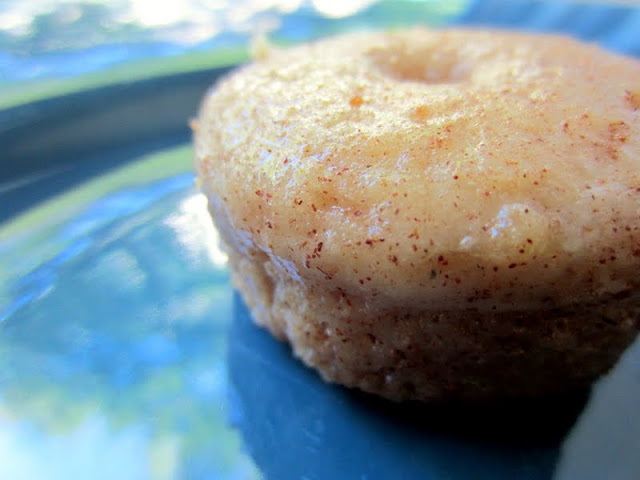 I experimented with several different glazes for the donuts - I tried vanilla, plain chocolate, chocolate coconut, orange (which ended up tasting like a gumdrop - no, thanks), powdered sugar cinnamon, and cinnamon glaze.  I think I can safely recommend any of the above, with the exception of the orange (unless that's your thing, in which case, go crazy!).  But in the end, my two favorites were the cinnamon and chocolate coconut glazes.  A little tip - these are fabulous if you freeze them once they're glazed.  The chocolate ones reminded me of those chocolate Entenmann's donuts, which I used to love. I brought both versions into work, and everyone loved them - especially the chocolate ones.  "Phenomenal" and "out of this world" were used to describe the flavor

Our host this month was Meg of Gluten-free Boulangerie.  Check out her blog for her recipe for Old Fashioned Raised and Cake Doughnuts, and for a list of all of the other amazing recipes from the other blogger participants. You can also look below my recipe at the bottom for the list of all the other bloggers and recipes in the Ratio Rally this month.

So say yes to donuts!  Check out what happens when a group of creative bloggers put their minds to something.  Beautiful - and delicious - things result. 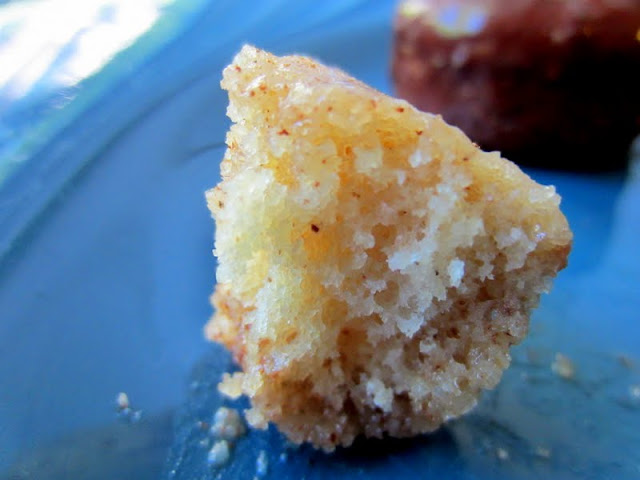 Place the donut dough into a plastic baggie and cut a hole in one corner (this is your makeshift pastry bag).  Pipe the dough into each donut tray, filling it about 2/3 of the way full.

Remove from the oven and leave in the donut pans for about 2 - 3 minutes to allow them to firm up.  When they're firm enough not to fall apart, gently remove them from the donut pans and place on a wire rack to cool.

Make whichever glaze your heart desires, preferably in a wide, flat bowl.  Drench each donut in glaze, rolling it around to ensure that all sides are covered.  Place each newly glazed donut on a plate or tray and place in freezer until glaze is frozen.  Then you can remove them from the tray and store them in tupperware - but it's still a good idea to place a sheet of wax paper between each layer of them.

Store in the freezer or fridge until ready to serve. The chocolate donuts tasted best frozen, but the cinnamon ones are equally good frozen or refrigerated.

Britt of GF in the City | Blueberry Fritters

I'll bet these are so moist and good. Great job!

The texture of these look great and I love the glazes!! Definitely have to try these :)

what a great idea - they do look great all dressed up in those glazes. The texture does look fantastic. Nice!

Mmmm, they look like they have a great crumb! I love that you used cranberry juice in these - I never would have thought of that!

It looks like you were able to achieve great texture, and with so little fat, what a feat!

These look so fluffy and good! The cranberry juice is an interesting addition - very creative.

Cranberry juice - what a great idea! Makes me start thinking about all the other flavors you could play with by using different juices in your batter. And lucky you to have a doughnut pan. There would definitely be more doughnuts in my life if I didn't always have to get out the big pot of oil to fry them. :)

Looks like your baked donuts came out with a nice crumb! Like how you tried so many different toppings. I baked mine too and pleasantly surprised.

the crumb on these little babies looks amazing and I love that there were a few different toppings - dessert with variety is the spice of life don't you think?

GOt to try these!